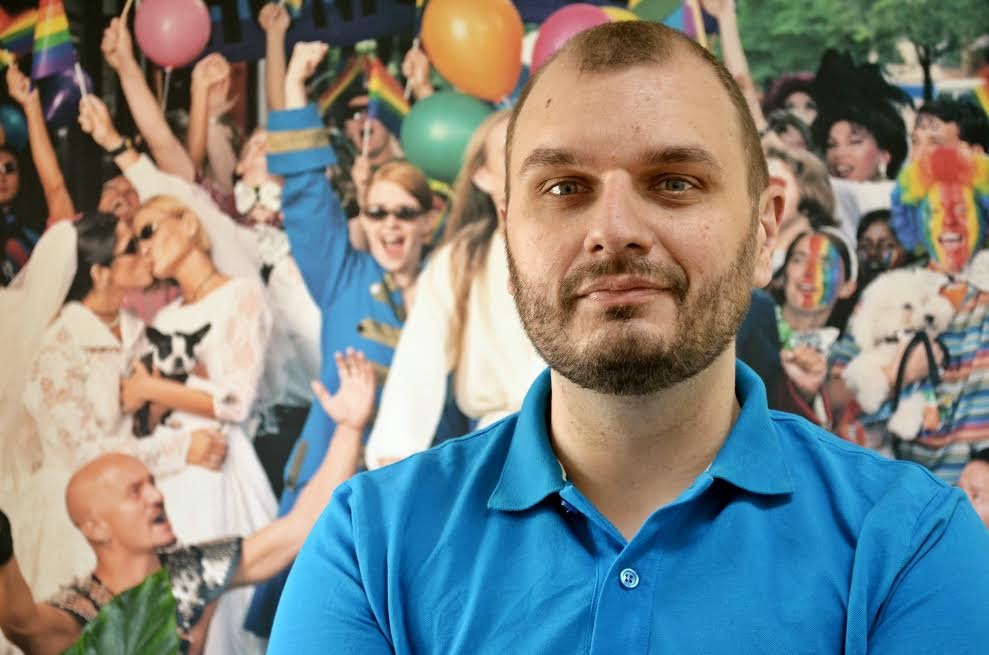 “I love the social margin; this is where the strongest desire to live dwells.”
Today we are honored to introduce Boban Stojanović and spotlight his amazing advocacy efforts in Serbia – Boban is one of 5 incredible people who have been shortlisted for this year’s David Kato Vision & Voice Award.

Boban Stojanović was born in 1978 in Zaječar, a small city in Eastern Serbia. Boban suffered mistreatment and abuse at the hands of his alcoholic father growing up, and this early exposure to domestic violence prompted him to get involved with activism at an early age. In his youth Boban worked with local NGO’s countering violence against women.

During the nineties, as war in what was formerly Yugoslavia raged on, Boban refused to join the army as a form of resistance to the ruling regime.  Boban was one of the most prominent activists to refuse serving in the army, and one of the loudest voices asking for termination of mandatory army service.

During this time, Boban volunteered in refugee centers across Serbia where he mainly worked with Roma children and children who had lost parents in the war. Through this work he came into contact with peace activists and began working alongside them toward non-violent social change.
In 2000 Boban moved to Belgrade where he soon came out as gay among only a handful of other publicly recognizable LGBT activists and gay people. Boban’s outspoken advocacy posed a considerable threat to his personal safety and put him at great risk. He was physically assaulted in public several times while receiving ongoing verbal harassment.

Boban’s home was attacked and vandalized twice, both in 2013 and 2014. In 2013 his home was set on fire and swastikas were spray painted on the walls. In 2014 unknown assailants broke the apartment windows by throwing stones. Boban and his partner are now forced to live in secret at an undisclosed location. He has filed several hundred criminal charges because of these threats, but only a handful of them have been processed so far, yet the harassment has only intensified.

Due to his public activism, Boban was disowned by part of his own family. In Serbia, this is the fate that awaits most of the people who are courageous enough to come out publically.

For almost two decades of activism, Boban has supported every vulnerable population in Serbia: National and religious minorities, women, children, persons living with disabilities, and refugees. He especially focuses on helping those who are doubly discriminated, individuals who are the most marginalized and especially vulnerable: People living with HIV, sex workers, men who have sex with men (MSM), and other queer populations.

In an interview Boban gave in 2013 he explained why he supports those who are the most ignored and overlooked in society by saying, “I love the social margin, this is where the strongest desire to live dwells,” A powerful testament to the strength and character of those marginalized in Serbian society.

The DKVVA is supported by a Secretariat based at the Global Forum on MSM & HIV (MSMGF). The MSMGF advocates for equitable access to effective HIV prevention, care, treatment, and support services tailored to the needs of gay men and other MSM, including gay men and MSM living with HIV, while promoting their health and human rights worldwide. You can find more information about the MSMGF at www.mpactglobal.org
Like us on Facebook!
Follow us on Twitter!

MPact @mpactglobal
Sunday, July 5th, 2020 at 12:35pm
Tomorrow is the kick off of @HIV2020 Online! Join us for the first ever community-led event on #HIV health and rights! Entirely FREE and streaming live all over the world!

Learn more about why MPact is joining the global call to #ReclaimTheResponse
https://t.co/Sh8oexBXJc
View on Twitter
2
8