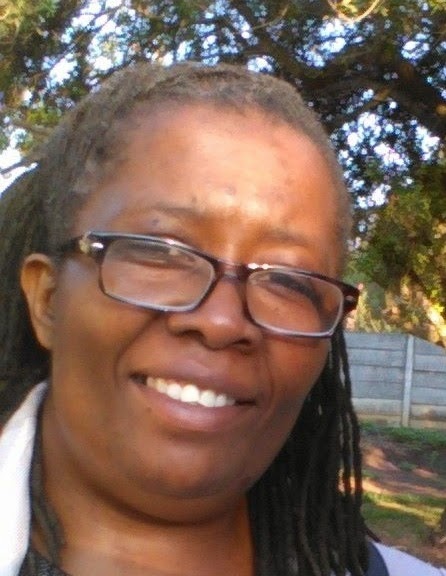 Renowned Ugandan activist Frank Mugisha will present Martha Tholanah with the award on stage at the prestigious Teddy Awards ceremony in Berlin this Friday.
11 February 2015 [Berlin] – The David Kato Vision & Voice Award (DKVVA) is proud to announce that the 2015 award will go to HIV Positive activist Martha Tholanah from Zimbabwe. Martha risks her life everyday to support lesbian, gay, bisexual, transgender, and intersex (LGBTI) people across the country. Her activism is a powerful example of a straight ally standing in solidarity with LGBTI people despite threats to her own safety and security.

Martha also demonstrates extraordinary leadership on behalf of other marginalized communities, fighting for women’s rights, disability rights and sex worker rights both locally and internationally. She will receive the award on stage this Friday, at the prestigious Teddy Awards ceremony which is part of the Berlin International Film Festival.

“I am incredibly honored to be given this award that to me symbolizes my struggle against injustice in Zimbabwe and across the globe,” said Martha. “By honoring my work we recognize the human dignity and spirit of every person.”

Inspired by the life and work of David Kato, the human rights activist murdered in his home of Kampala, Uganda in January of 2011, the DKVVA recognizes the leadership of individuals who strive to uphold the human rights of sexual minorities worldwide, particularly in challenging circumstances and unsupportive policy environments. The award provides winners with a global media platform and a $10,000 grant to support their efforts.

The DKVVA is supported by a Secretariat based at the Global Forum on MSM & HIV (MSMGF). The MSMGF advocates for equitable access to effective HIV prevention, care, treatment, and support services tailored to the needs of gay men and other MSM, including gay men and MSM living with HIV, while promoting their health and human rights worldwide.

“Community-led efforts play a central role in securing LGBT rights,” said Micah Lubensky, Program Manager of the award and Community Mobilization Manager at MSMGF. “Yet so often these crucial efforts go unrecognized and unfunded. Through the David Kato Vision & Voice Award, we are able to provide activists with a platform to elevate the issues that are affecting their communities, as well as much needed funding to sustain and expand their work.”

As a trained family therapy counselor qualified in medical rehabilitation, Martha has established and headed health programs for Gays and Lesbians of Zimbabwe (GALZ) and the Network of Zimbabwean Positive Women (NZPW+). She currently serves as Chairperson of the Board for GALZ, an organization that has been a long time partner and contributor to MSMGF’s work.

She is currently facing two charges with the Zimbabwe Government linked to her involvement with LGBTI activism. Despite these challenges she remains deeply committed to her efforts and continues to represent GALZ in legally challenging state-sanctioned homophobia and violence.

Martha is also a proud feminist fighting to eliminate sexism in Zimbabwe. She works to make women living with HIV – young women and LBT women more visible in a male-dominated political and social landscape.

“I have been on a long journey to accept myself as an HIV positive African woman. I fight for others to overcome the stigma and discrimination in their lives so that they can find self-love and acceptance too,” Said Martha. “This award strengthens my work with organizations such as GALZ and NZPW+. On the day I receive this award, my wish is that the violence and discrimination in Zimbabwe finally stop, and that all people will come together to end discrimination against marginalized communities worldwide.”

Frank Mugisha, Chair of the David Kato Vision & Voice Award and Executive Director of Sexual Minorities Uganda (SMUG), will present Martha with the award on stage at the Teddy Award ceremonythis Saturday in Berlin.

“Martha’s voice and vision inspire hope for a world where injustice toward any and all marginalized communities is no longer tolerated,” said George Ayala, David Kato Vision & Voice Award Advisory Committee Member and Executive Director of MSMGF. “As we celebrate her life and work, we commemorate David Kato’s legacy and recognize the often dangerous efforts of individuals like David and Martha, who demonstrate what human rights and equality really look like.”

The David Kato Vision & Voice Award (DKVVA) recognizes and supports the work of leaders who strive to uphold the human rights and dignity of lesbian, gay, bisexual, transgender, and intersex (LGBTI) people around the world. More information about the DKVVA can be found at http://www.visionandvoiceaward.com .

The Teddy Award is an award given at the Berlin International Film Festival, celebrating films and individuals that communicate queer themes and content on a large scale and contribute to more tolerance, acceptance, solidarity and equality in society. Learn more athttp://news.teddyaward.tv/en/ .

MPact @mpactglobal
Saturday, July 24th, 2021 at 11:01am
When will @POTUS nominate a new leader for @PEPFAR? -- one of the world's largest funders of the global #HIV and #AIDS response https://t.co/eqq6iIwJ0j
View on Twitter
0
0

MPact @mpactglobal
Friday, July 23rd, 2021 at 11:02am
There is much to learn about how to ensure that #PrEP and other live-saving interventions are accessible to the communities who need them most @aidsmap @iasociety https://t.co/xrXAV93m30
View on Twitter
1
1

MPact @mpactglobal
Thursday, July 22nd, 2021 at 2:30pm
If we’re serious about ending the #HIV epidemic, we have to ensure equal access to #PrEP in all communities and not only for the insured https://t.co/xM6WAIOPGZ
View on Twitter
1
3

MPact @mpactglobal
Thursday, July 22nd, 2021 at 11:02am
We can't run from stigma about HIV. It's important to be open and honest about sex #MeAndMyMentalHealth

MPact @mpactglobal
Wednesday, July 21st, 2021 at 11:02am
Join MPact’s team as a Communications Specialist! An amazing opportunity to develop and implement communications strategies, programs, and materials and support of MPact’s work on HIV, health, and rights for gay and bisexual men.

MPact @mpactglobal
Monday, July 19th, 2021 at 5:35pm
This Thursday! Join us for a webinar with @sdbaral @galzinf @balipeduli & @thediNigeria to discuss how health providers can better work with gay communities around the globe

MPact @mpactglobal
Sunday, July 18th, 2021 at 12:35pm
Activists in #Hungary are fighting for their #RightTo freedom of expression https://t.co/MJakShud7V
View on Twitter
0
2

MPact @mpactglobal
Friday, July 16th, 2021 at 12:35pm
9 years ago today the @US_FDA first approved #PrEP as a tool for the prevention of #HIV -- now its our job to get it to those who need it most @ITPCglobal @AlGlobalKyiv @EqualityJa https://t.co/yNVGibzsE3
View on Twitter
3
6

MPact @mpactglobal
Thursday, July 15th, 2021 at 12:35pm
Check out our new handbook for health professionals working with gay communities around the globe and don't miss our introductory webinar next week with @galzinf @balipeduli @sdbaral @JohnsHopkinsSPH https://t.co/hm4TdI6fq0
View on Twitter
2
3

MPact @mpactglobal
Tuesday, July 13th, 2021 at 4:00pm
Demand better for the lives of PLWH! People living with #HIV must be meaningfully involved in the federal HIV response. Check out the @HIVCaucus policy agenda to see what needs to change.
#PeoplesHIVPlan
https://t.co/yJEZxlz5vt https://t.co/BnHUWULHzt
View on Twitter