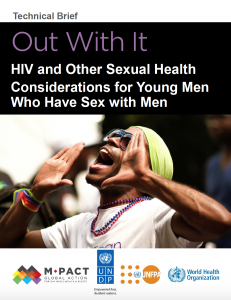 MPact is proud to announce the release of “Out With It: HIV and Other Sexual Health Considerations for Young Men Who Have Sex with Men”.

This new technical brief, developed in collaboration with United Nations Development Programme (UNDP) United Nations Population Fund (UNFPA) and the World Health Organization (WHO), gives recommendations for making services, spaces, and funding for sexual health accessible to young gay and bisexual men. It is an updated, abbreviated adaptation of the technical brief titled “HIV and Young Men Who Have Sex with Men” which was published in 2015 by the WHO. This publication puts forward evidence-based information on the state of HIV and lays out solutions for community organizers leading sexual health programs and interventions at local and country levels. 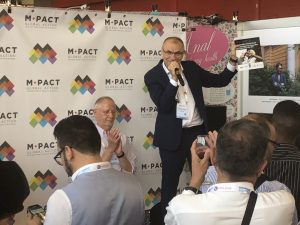 “In order to address HIV and other STDs, we need to think about the larger question of young gay men’s health.” – Gottfried Hirnschall, Director of the HIV/AIDS Department and the Global Hepatitis Programme of the WHO, announcing the release of this new technical brief at the AIDS2018 Global Village

Effective and tailored sexual health services must begin by sensitively and respectfully assessing the needs of young men who have sex with men and reaching them with comprehensive services. The publication lays out a full package of WHO-recommended interventions, including health sector interventions and strategies for creating enabling environments to implement these services for young gay and bisexual men. This also includes a list of recommendations for making services accessible, acceptable, affordable and high-quality as well as steps to make necessary changes to the legal and policy environments.

MPact held a press conference to announce the release of this technical brief as well as to shed the light on youth-led solutions to the sexual health and rights challenges facing young gay and bisexual men around the world. There are an estimated 1.9 million new HIV infections a year globally, a disproportionate number of which are among young men who have sex with men. In order to address this ongoing issue, MPact wanted to provide a platform to a new generation of activists in the field of HIV and sexual health.

Joined by Sergio Lopez of SOMOSGAY and Keletso Makofane of the International AIDS Society Governing Council, the press conference shined a spot light on the winners of a Global Challenge MPact issued earlier this year. Twelve finalists were invited to present their programs at MPact’s Out With It AIDS2018 pre-meeting. The winning programs are – The ManHood Project led by a team from Trans and Intersex Rising Zimbabwe and The Hunt App led by the organization Lighthouse in Vietnam. Each of these youth-led innovations will receive $10,000 to pilot-test their interventions.

“We often miss opportunities to learn about community-led innovation. For as much rhetoric as there is about young people and where HIV is really concentrated we lack urgency and specificity regarding young gay and bisexual men” – George Ayala at the Out With It Press Conference at AIDS2018