Make a donation to MPact today

Each year on December 1st, we commemorate the lives lost and the fights won that have shaped the world we live in today. This year’s World AIDS Day campaign, led by UNAIDS, focuses on the critical role communities play in the global HIV response.

HIV activism was ignited by our communities. When governments and pharmaceutical institutions failed those of us dying of a mysterious new disease, communities of lesbian, gay, bisexual and transgender (LGBT) people mobilized to protect ourselves – to provide shelter, to cook food, to offer counseling and support for one another when we needed it most. The first AIDS advocates put their bodies on the line because we had no choice. When we became too weak to speak for ourselves, the next generation of activists staged kiss-ins and die-ins to amplify our forgotten voices and to underscore the disproportionate impact HIV was having on our friends, our families, our lovers, and our communities.

Here at MPact, we are always working to put communities first. Since our founding, we have created platforms and organized networks for gay and bisexual men around the world to connect to one another in order to strengthen our global community. In order to ensure that no one is left behind in the ongoing fight for sexual health and human rights around the world, we must advocate first for the needs of those whose voices are most often unheard. 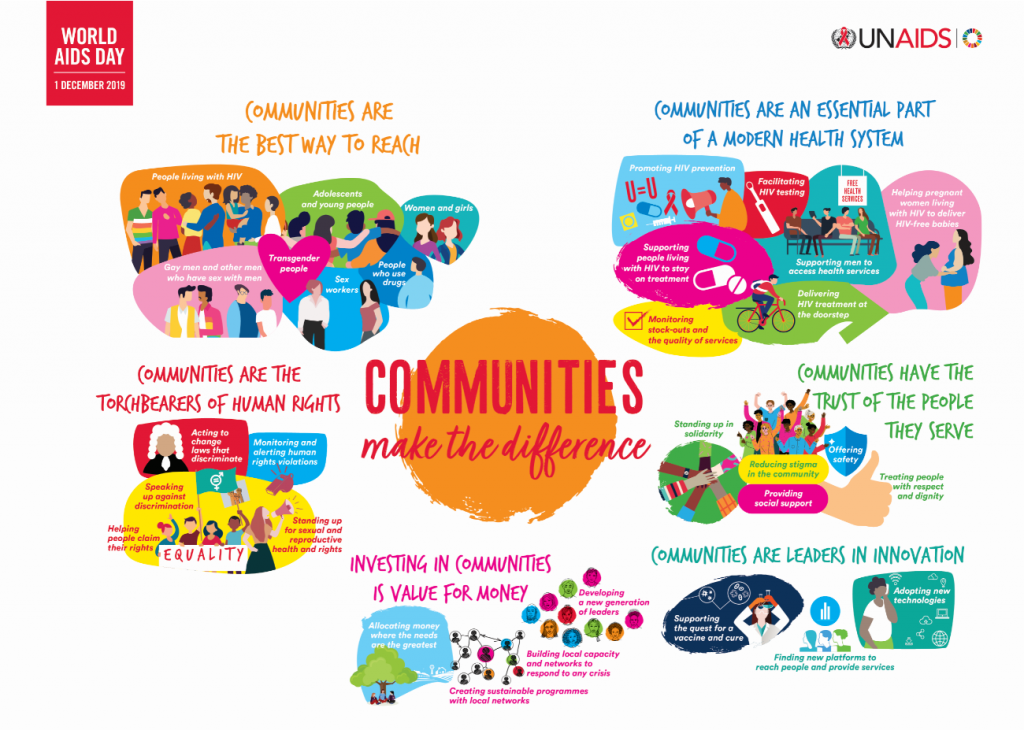 Today’s global HIV response requires that we work in coalition with other key populations because we know there is strength in unity. This includes networks of people living with HIV, people who use drugs, sex workers, and transgender people. Together with our partners at GNP+, ICW, INPUD, ITPC, IRGT, NSWP, TB People, Y+, the Communities Delegation to the Global Fund, and the UNAIDS PCB NGO delegation, MPact worked to define “What is a Community-Led Organization?” in a recent publication. Our organizations all share the belief that initiatives led by our communities result in a more effective HIV response.

Criminalization, stigma, discrimination and violence continue to plague our communities around the world. For example, same-sex relations remain criminalized in 78 countries, which deters gay and bisexual men and transgender people from accessing the health and HIV services they may need. Biomedical advances are inching the world closer to global targets in prevention. However, our communities are being left behind. So many of us still lack easy access to basic life-saving interventions like condoms, lubricants, and antiretroviral medications.

That is why, as we bring 2019 to an end, I am asking that you join me in supporting MPact in its ongoing efforts to uplift the voices of the most marginalized through the community-led programs and policy initiatives with which we’re linked. As civil society space shrinks amid growing worldwide conservatism, we must invest in community- and key population-led responses to HIV. Supporting MPact helps us strengthen communities around the world – communities we need now more than ever.

Join me in donating to MPact today

MPact Global Action for Gay Men’s Health and Rights was founded in 2006 by a group of activists concerned about the disproportionate HIV disease burden shouldered by gay men and other men who have sex with men. MPact works at the intersection of sexual health and human rights. We are linked to more than 120 community-based organizations in 62 countries who are leading innovative community-led solutions to the challenges faced by gay and bisexual men around the world.