MPact is a proud and steadfast supporter of the HIV2020 Conference in Mexico City, and will not be participating in the 2020 International AIDS Conference taking place in San Francisco and Oakland next year. We stand in solidarity with GNP+, ICW, INPUD, NSWP, ITPC, and Mexican HIV activists who are working diligently to plan a community-centered alternative event, scheduled to take place July 5-7 of next year.

United States’ border policies that restrict entry to sex workers, people who use drugs, and people who have been incarcerated, will make it exceedingly challenging for large segments of our community to participate in the International AIDS Conference. In addition, recent xenophobic, classist, and racist immigration reforms as well as changes in international development priorities under the Trump administration have created a human rights crisis for migrants throughout the United States. Moreover, the United States has been and remains an unsafe and inhospitable place for people living with and disproportionately affected by HIV, especially cis and trans women and gay and bisexual men of color.

Despite community concerns, the International AIDS Society has persisted with the decision to bring their conference to our own home-base in California’s Bay Area. Their decision is an example of how community voices are disregarded by the mainstream HIV industry, which seems willing to tolerate the United States’ discriminatory border restrictions in favor of financial and other self-interests.

HIV2020 is a critically necessary call for change. Led by people living with HIV, gay and bisexual men, people who use drugs, sex workers, transgender people, and our allies, HIV2020 reflects a new intersectional shift in the global, community-led response to HIV.

“An intersectional response to HIV is unlikely if the mainstream HIV industry continues to ignore our communities,” said Dr. George Ayala, Executive Director of MPact. “HIV2020 will finally give HIV advocates the chance to more directly address the social drivers of the epidemic, by linking their work across social justice movements. Sexual orientation and gender equity, racial justice, decriminalization of sex work and drug use, sexual and reproductive health and rights are all inter-related. We are modeling for the world a new way of working, without having to leave parts of ourselves at the door. We are reclaiming the global HIV response.”

The organizing coalition for the HIV2020 Conference now represents over 100 endorsing organizations from around the world. Our local partners in Mexico have graciously welcomed us to bring our event to their capital city. We will encourage important and honest conversations about sex, sexuality, gender identity, sexual health, class equity, racial justice, decriminalization, and human rights. These conversations are unlikely to happen without political pretense at AIDS2020. 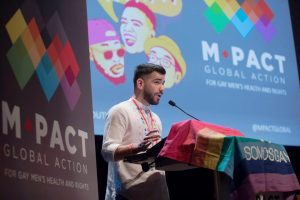 MPact has taken a leadership role at International AIDS Conferences since our founding in 2006. We have successfully led abstract-driven sessions, organized workshops and produced networking zones. MPact is best known for our popular pre-conference events that set the tone for discussing the disproportionate burden of HIV among gay and bisexual men. Our goal has always been to bring attention to the unique needs and concerns of our communities in the HIV response. It is with this mission in mind that we will create a safe, alternative space for key populations to gather and strategize.

Although MPact will not participate in AIDS2020, we acknowledge and support communities of gay and bisexual men, people who use drugs, sex workers and transgender people who will be there. We urge our community colleagues and allies to support one another and demand that your voices are heard. We will also continue to work in coalition with our communities attending AIDS 2020 to build bridges and exchange strategies.

Learn more and stay up to date with the HIV2020 Conference at www.hiv2020.org

Read The Other Global Networks’ Statements of Solidarity on HIV2020