On August 24, a nine-judge Constitution Bench of India’s Supreme Court unanimously upheld a fundamental right to privacy that has wide-ranging implications for the country’s lesbian, gay, bisexual, transgender (LGBT) and HIV-affected communities.

The case was challenging privacy rights in a mandatory biometric identity card program, but the judgment (available to read in full here) explicitly links sexual orientation to fundamental rights. Several excerpts from the ruling, highlighted below, challenge the rationale used in a 2013 order by a two-judge Supreme Court bench that affirmed the legality of Section 377 of the Indian Penal Code (IPC), which criminalizes same-sex behavior. 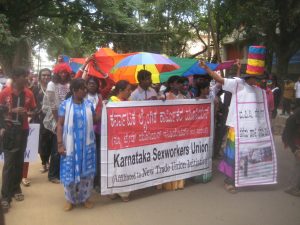 The new decision is important to India’s LGBT communities because a challenge to the 2013 decision is already ongoing. The new judgment will undoubtedly provide precedent in favor of protecting the privacy of sexual and gender minorities.

Criminalization of same-sex behavior provides a window for blackmail, extortion, and a variety of other human rights violations that impact the LGBT community. Importantly, criminalization also greatly impedes access to HIV prevention and treatment services, as explicated by the WHO. A study of eight countries, including India, showed that criminalization of same-sex behavior is correlated with lower spending on HIV services for gay men and other men who have sex with men.

This is despite the fact that there were 2.1 million people living with HIV in India in 2015, ranking third in the world behind South Africa and Nigeria, according to UNAIDS. In 2015, prevalence of HIV among men who have sex with men was 4.3%, and even higher among transgender people, at 7.2%.

Earlier this year, India took a major step forward by passing the landmark HIV and AIDS (Prevention and Control) Bill, which makes it illegal to discriminate against people living with and affected by HIV. The first of its kind in South Asia, the Bill covers the workplace, education, public office, housing, and healthcare. Additionally, in 2014 India’s Supreme Court granted the right to self-identify as “third gender” on official identity documents, permitting transgender and hijra individuals to update documents without medical evidence. The decision also provided quotas in jobs and education for transgender people, as with other minorities.

Anti-discrimination protections for HIV-affected people and legal recognition for gender identity are still limited in impact when people still fear criminalization for consensual, same-sex behavior. Transgender people and people living with HIV who engage in same-sex relations still risk serious consequences when speaking to medical providers. Only with the repeal of Section 377 and decriminalization of same-sex behavior will India’s HIV response begin to realize its full potential for gay, bisexual men and other men who have sex with men, transgender people, people living with HIV, and other key populations.

Below are excerpts from the historic ruling on Right to Privacy that are particularly relevant to the ongoing efforts to repeal Section 377 (emphasis added):

“That ‘a miniscule fraction of the country’s population constitutes lesbians, gays, bisexuals or transgenders’ (as observed in the judgment of this Court) is not a sustainable basis to deny the right to privacy. The purpose of elevating certain rights to the stature of guaranteed fundamental rights is to insulate their exercise from the disdain of majorities, whether legislative or popular. The guarantee of constitutional rights does not depend upon their exercise being favourably regarded by majoritarian opinion. The test of popular acceptance does not furnish a valid basis to disregard rights which are conferred with the sanctity of constitutional protection. Discrete and insular minorities face grave dangers of discrimination for the simple reason that their views, beliefs or way of life does not accord with the ‘mainstream’. Yet in a democratic Constitution founded on the rule of law, their rights are as sacred as those conferred on other citizens to protect their freedoms and liberties. Sexual orientation is an essential attribute of privacy. Discrimination against an individual on the basis of sexual orientation is deeply offensive to the dignity and self-worth of the individual. Equality demands that the sexual orientation of each individual in society must be protected on an even platform. The right to privacy and the protection of sexual orientation lie at the core of the fundamental rights guaranteed by Articles 14, 15 and 21 of the Constitution.”

“The view in Koushal that the High Court had erroneously relied upon international precedents ‘in its anxiety to protect the so-called rights of LGBT. persons’ is similarly, in our view, unsustainable. The rights of the lesbian, gay, bisexual and transgender population cannot be construed to be “so-called rights”. The expression ‘so-called’ seems to suggest the exercise of a liberty in the garb of a right which is illusory. This is an inappropriate construction of the privacy based claims of the LGBT population. Their rights are not ‘so-called’ but are real rights founded on sound constitutional doctrine. They inhere in the right to life. They dwell in privacy and dignity. They constitute the essence of liberty and freedom. Sexual orientation is an essential component of identity. Equal protection demands protection of the identity of every individual without discrimination.”

“The invasion of a fundamental right is not rendered tolerable when a few, as opposed to a large number of persons, are subjected to hostile treatment. The reason why such acts of hostile discrimination are constitutionally impermissible is because of the chilling effect which they have on the exercise of the fundamental right in the first place…The chilling effect on the exercise of the right poses a grave danger to the unhindered fulfilment of one’s sexual orientation, as an element of privacy and dignity. The chilling effect is due to the danger of a human being subjected to social opprobrium or disapproval, as reflected in the punishment of crime. Hence the Koushal rationale that prosecution of a few is not an index of violation is flawed and cannot be accepted. Consequently, we disagree with the manner in which Koushal has dealt with the privacy – dignity based claims of LGBT persons on this aspect.

Since the challenge to Section 377 is pending consideration before a larger Bench of this Court, we would leave the constitutional validity to be decided in an appropriate proceeding.”

Photos used under CCBY from Nick Johnson via Flickr

MPact @mpactglobal
Sunday, April 5th, 2020 at 12:00pm
LGBT people will not be made scapegoats in the panic surrounding the #COVID19 pandemic. We must continue to monitor human rights abuses that have occured as a result of this global crisis https://t.co/fyx6zQsuwl
View on Twitter
1
2

MPact @mpactglobal
Saturday, April 4th, 2020 at 6:00pm
Reach out to your communities, offer support as you can, ask if you need support. These are trying times for us all. https://t.co/9nTgNsCGEo
View on Twitter
0
4

MPact @mpactglobal
Saturday, April 4th, 2020 at 12:01pm
The antiquated rule was only reduced, not eliminated. What will it take for the US to realize this is still a discriminatory policy? #COVID19 https://t.co/16Rqg7ioJl
View on Twitter
2
5

MPact @mpactglobal
Friday, April 3rd, 2020 at 12:15pm
Thanks to the over 15,000 gay and bisexual men who took the #GMHR2019 survey, we now have data which will help us advocate for health and rights around the world. Learn more about our research initiatives: https://t.co/Rj2roXyZpc
View on Twitter
0
4

MPact @mpactglobal
Thursday, April 2nd, 2020 at 12:15pm
While life in lock-down may seem incompatible with sex, we are here to remind you that there is always room to think creatively about intimacy and pleasure! Want more tips on sexual health in the time of #COVID19? Check out our latest blog: https://t.co/nkvxNnZrPY https://t.co/435FsnnSn4
View on Twitter

MPact @mpactglobal
Wednesday, April 1st, 2020 at 12:20pm
Our partners in #Zimbabwe are working with healthcare providers to address stigma and discrimination against gay and bisexual men in their respective clinical settings. Learn more: https://t.co/vvHIt06DiG
View on Twitter
1
2

MPact @mpactglobal
Tuesday, March 31st, 2020 at 12:05pm
The @PEPFAR Country Operational Plans are a critical opportunity for advocacy to get funding to key populations affected by #HIV and AIDS. Learn more here: https://t.co/IUdVkoG0gL
View on Twitter
3
5

MPact @mpactglobal
Sunday, March 29th, 2020 at 12:30pm
From @CIVICUSalliance, an essential reminder to donors to allow for maximum flexibility amid the #COVID19 crisis to enable civil society to respond in the best interests of our communities https://t.co/ir4unT3GS2
View on Twitter
0
1

MPact @mpactglobal
Sunday, March 29th, 2020 at 10:30am
We cannot standby while the US administration strips communities around the world of their human rights. Learn more about the work of our partners at @Global_Equality here: https://t.co/Xr9Jig6roY
View on Twitter
1
3

MPact @mpactglobal
Saturday, March 28th, 2020 at 10:30am
“We need to make sure that people living with HIV are able to continue getting the care that they need and those programs are going to need to adapt to this new environment.” - @AIDSInstitute #COVID19 https://t.co/CJ2MciWyZ3
View on Twitter
1
4

MPact @mpactglobal
Wednesday, March 25th, 2020 at 10:01am
Grateful to see this community guide from our partners at @ITPCglobal which answers fundamental questions like:
What is is #COVID19 and how do you get it?
How can it be prevented and what if you feel ill?
How do you get tested and how is it treated?
https://t.co/f8sG3hY8tI
View on Twitter
1
3