The Programme Coordinating Board (PCB) was launched in 1996 in order to guide UNAIDS in establishing policies, reviewing long term plans of action, and making recommendations for execution of programs among other responsibilities. The PCB is comprised of representatives of 22 governments from all geographic regions, the UNAIDS co-sponsors, and representatives of nongovernmental organizations including associations of people living with HIV. Learn more about the PCB’s NGO Delegation.

At the 41st UNAIDS PCB Meeting in Geneva, MSMGF and our partners in the NGO Delegation made statements on many agenda items including Agenda 5: “Update on Actions to Reduce Stigma and Discrimination in All its Forms” in hopes that the PCB will adopt stronger decision points. The full PCB Agenda and background documents can be found here. 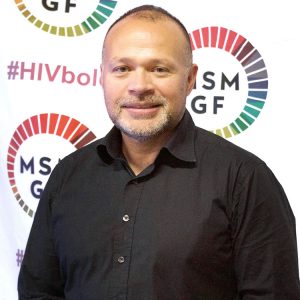 “The Global Forum on MSM & HIV routinely gathers information from gay men and other men who have sex with men about their experiences accessing and utilizing health services. Over the past 7 years, we have surveyed nearly 30,000 men from across 120 countries. While we have documented incremental and positive changes in HIV service utilization, men have consistently reported serious challenges accessing basic HIV prevention and treatment related to their often-harsh experiences of homophobia and stigma.

When we add the countless examples of police harassment or brutality, landlord evictions, humiliation, blackmail, and extortion from co-workers, and physical and sexual violence from family members – it isn’t difficult to understand how HIV comes to be concentrated in gay men and other men who have sex with men worldwide.

The Global Forum on MSM & HIV has learned a great deal about the barriers to HIV service for gay men and other men who have sex with men. For example:

Conversely, we know that HIV-negative men who report higher engagement with gay community are:

Importantly, men are 19 times more likely to participate in prevention programs when they accessed those services from community-based organizations led by or serving lesbian, gay, bisexual and transgender people. The importance of community-led services cannot be over-emphasized.

To conclude, creating an enabling environment for community-based organizations to offer services and requiring sensitization trainings for healthcare providers are critical to facilitating easy access to and greater uptake of HIV services. But this requires that we openly acknowledge and actively challenge homophobia as the single biggest threat to ensuring health as a right for gay men and other men who have sex with men. Thank you.”

The full PCB Agenda and background documents can be found here.

“People in Asia and Pacific are facing increasing risk of HIV and other viral infections, with 38 countries applying laws that create barriers to HIV response; 15 with compulsory drug detention and rehabilitation for people who inject drugs, including 13 countries without explicit reference to harm reduction for people who inject drugs in the national program. Additionally, 37 countries criminalize some aspects of sex work and 17 criminalize same-sex relations. Yesterday, I spoke about failing leadership that put people who inject drugs at high risk of new HIV infections. The failure to see evidence and rights-based approaches, and the increasing force from intolerant groups will continue to leave us behind.

Just two months ago in our region, Asia and the Pacific, we were shocked by the recent raid by law enforcement authorities on a Gay Spa. Not that we were surprised with the continuous criminalisation, but the fact that condoms distributed by the Spa were used as evidence to detain at least 51 gay men. We have also seen countless forced-closure of brothels that create transactional sex on the streets and Social Media platforms. The state of war on drugs, as I mentioned yesterday, will only create new HIV infections. Indonesia, right now, contributes 18% of new HIV infections in Asia and the Pacific, after China and India.

With the advancement of medical technology, people living with HIV now have higher life expectancy compared to 20 years ago. However, if we are to die, we are not dying because of AIDS; we are dying because of stigma, discrimination, criminalisation and the continuously shrinking civil society space that silences our critical role in the response.

Business as usual is not enough. It is time that we make a collective and stronger political commitment, with funding and clearer targets, to end stigma and discrimination. Thank you.”

The full PCB Agenda and background documents can be found here. 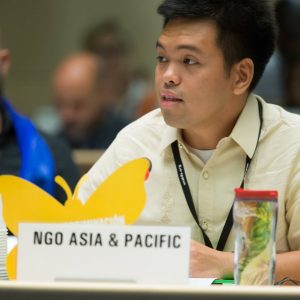 “The NGO Delegation welcomes the report on the updates on actions to reduce stigma and discrimination in all its forms. Actions have taken place since this Decision Point was approved at the 35th PCB, my first PCB meeting and these have resulted in important changes.

Communities and civil society play a central role in reducing stigma and discrimination. The work done by the Global Network of People Living with HIV and the International Community of Women Living with HIV/AIDS on the Stigma Index have resulted to measurable indicators on stigma and discrimination,as seen in the Global AIDS Monitoring report; and we encourage Member States to support PLHIV networks in implementating the Stigma Index, as part of improving their national HIV programs, especially in regions where it has not been implemented.

Also, the work done by lesbian, gay, bisexual, transgender, and intersex people, together with UNDP and UNESCO, such as in Asia Pacific, has resulted in a number of school policies and programs that not only protect LGBTI from discrimination, but provide a space for them to come together and demand for HIV services in their schools. People who use drugs and civil society who work on drug policy in my region, Asia Pacific, have formed a regional response team, in partnership with UNAIDS RST, to address the ongoing war on drugs in the Philippines and to resist any similar undertaking in the region. The Joint Programme needs to accelerate support for these efforts, as well as for Member States towards non-discriminatory access to employment, justice, education, and health services of people living with HIV and key populations.

This is my final intervention as an Asia Pacific delegate, and I would like to take this opportunity to thank everyone for their commitment. We come from diverse backgrounds that make our work at the PCB challenging, but also exciting. As someone living with HIV, seeing this room full of Member States, UN agencies, partners, and most especially communities and civil society, gives me a sense of joy and of hope. The PCB is a governance model that should be replicated in other UN boards, and I thank you all for your commitment to end this pandemic and to work towards making this world a better place to live in for people like me.

Our work does not and will not end here. For every pat on the back, we need to always ask ourselves: is this enough? Until we get to the end of the AIDS epidemic, it will never be enough. Let’s continue to act and keep the passion alive. We will get there. We will get there. Thank you.”

MPact @mpactglobal
Saturday, January 18th, 2020 at 11:50am
We are hopeful that advocates and activists in #Bhutan are close to overturning discriminatory anti-LGBT laws in their country https://t.co/HyE9QjEtVI
View on Twitter
0
3

MPact @mpactglobal
Thursday, January 9th, 2020 at 11:30am
Join us at the US National Hispanic/Latinx Health Leadership Summit this March! Register now! @LatinoCommAIDS https://t.co/3XYILdlCp2
View on Twitter
0
0

MPact @mpactglobal
Monday, December 30th, 2019 at 11:25am
The @ICASA2019Rwanda Conference was such an incredible way to end our year -- to see advocates and activists from all across Africa join together and celebrate all the work they have done to fight for the sexual health and human rights of all people https://t.co/BXgSqMlOdI
View on Twitter
1
4
Menu