Reducing Stigma and Discrimination in Access to HIV Health Care for Gay and Bisexual Men and Transgender Women Using Mystery Patients in Cameroon and Zimbabwe: A Case Study 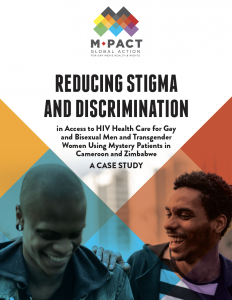 This case study highlights two examples of a community-led monitoring approach using mystery patients to document stigma and discrimination in the provision of health care.

The process and outcomes of using these strategies in Cameroon and Zimbabwe are described. In each country, over a period of 10-12 months, gay and bisexual men and transgender women documented their experiences at select health care facilities using standardized tools.

In Cameroon, findings from 162 covert observations were used to create a sensitization training for health care workers. During trainings of 120 health care officials and workers from three health districts, quantitative findings and mystery patient testimonials were shared. Trainings led to the development and implementation of corrective action plans in districts’ facilities.

In Zimbabwe, patient reports were fed back to health care facilities on a quarterly basis. Changes in response to feedback from the 456 mystery patients included establishing new training policies, hanging affirming signage, and advocacy led by nurses for sensitization to be included in their degree programs’ curriculum.

Continuous improvements led to increased use of facilities by gay and bisexual men. In both countries, the use of mystery patients had a community mobilizing effect. The projects also brought gay and bisexual men, transgender women, and local health care facilities together to work collaboratively on eliminating barriers to access to care.