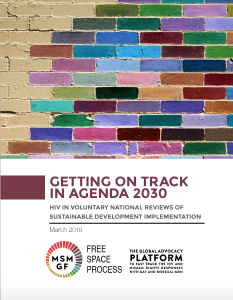 A new report released today by the Global Forum on MSM and HIV (MSMGF) in collaboration with the Global Platform to Fast Track the Human Rights and HIV Responses with Gay and Bisexual Men and the Free Space Process argues for consistent and robust reporting on HIV in the Voluntary National Reviews on Sustainable Development.

Titled “Getting on Track in Agenda 2030,” the report is released ahead of regional meetings commencing this month in preparation of the annual High Level Political Forum on Sustainable Development. The report calls upon UN agencies, Member States, and members of civil society to collaboratively ensure HIV-related data is included in the framework of Agenda 2030.

The 17 Sustainable Development Goals (SDGs) and accompanying 169 Targets in Agenda 2030 for Sustainable Development include a commitment to end the epidemic of AIDS by 2030. This is monitored by an agreed upon indicator for the number of new HIV infections per 1,000 uninfected population by sex, age, and key population, which includes gay men and other men who have sex with men, people who inject drugs, sex workers, and transgender people. This commitment is aligned with the UNAIDS Fast-Track strategy to end the epidemic by 2030.

The international mechanism for review of progress on the SDGs is the annual High Level Political Forum (HLPF), which includes a thematic review of selected SDGs, side events, the adoption of a Ministerial Declaration, and the Voluntary National Review (VNR) of SDG implementation by Member States. 48 countries will participate in the VNR process this year at the HLPF at UN headquarters in New York from July 9 – 18.

Among the 43 VNR reports submitted by Member States in 2017, only 32 VNR reports included any mention of HIV. Coverage of HIV is inconsistent and uneven across VNR reports, with most reports referring to aggregate HIV prevalence or incidence in the general population. Only nine VNR reports mentioned key populations, and even fewer refer to HIV-related stigma and discrimination. MSMGF believes this is not enough to meet Fast-Track and SDG targets, and more coordinated action and commitment is necessary.

“There remains unfinished business in the global HIV response, including persistent health disparities, stigma, and discrimination. HIV continues to severely impede the ability of countries to achieve development priorities beyond health, and continued visibility and integration of HIV within mainstream development goals has never been more important.”

The report finds that civil society and community representatives were essential in shaping the content around HIV issues in many VNR reports in 2017. Thus, we encourage civil society members to continue advocating during 2018 VNR national consultations.

In order to end the epidemic, Member States must show the political will to proactively and meaningfully engage civil society and communities, especially key population-led organizations. HIV must be addressed as a cross-cutting a development challenge, and all stakeholders must realize that fulfilling the SDGs and ensuring the principle of “leaving no one behind” will require more effort to include HIV-related data and national HIV priorities.

The Free Space Process (FSP) partnership brings together 11 international civil society, key population networks, and network organizations in an effort to proactively coordinate and collaborate on joint advocacy. FSP provides a “free space” for partners to discuss and work on common strategic policy and aims to maximize dynamic, experienced, and well connected advocacy for greater effect and combined policy impact.