In 1996, Harry Lit organized a modest weekend gathering for the gay “bear” community in the beautiful and scenic Guerneville, California on the Russian River just north of San Francisco.

Aware of the marginalization and lack of spaces for gay men who did not fit the mainstream gay scene, Lit used the event to establish the Lazy Bear Fund (LBF) as a way to celebrate community, love, and diversity. Since its inception, LBF has donated over 2 million dollars to non-profit and charity organizations in the Bay Area.

The 21st annual Lazy Bear Weekend took place the first week of August 2017, with over 2000 men from all around the world in attendance—a record in the history of Lazy Bear. 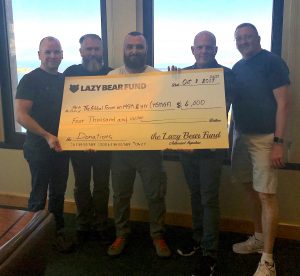 The Global Forum on MSM & HIV was honored to be selected as a beneficiary this year. Participants had the opportunity to learn about the important work of MSMGF between socializing at pool parties, games, performances, and other activities.

Building a community of love, respect, and diversity among gay men is core to the mission of MSMGF, and the $4000 of donated funds will be utilized toward developing a new campaign and research initiative among young gay men around the world through MSMGF’s Youth Reference Group.

“For Lazy Bear Weekend 21 in August, we were able to start making donations to charitable organizations within two months. We proudly donate to groups that promote community and address hunger, refugee crises and natural disaster relief” said David Barker, the board president of LBF.

The LBF organization is currently led by long-time attendees, supporters and previous staff members of Lazy Bear:  Fred Bothe, Trey Sheldon, Steve Adams, John Jacob, and David Barker. The new Board is steering a new strategic vision for LBF while safeguarding the legacy of Harry and his partner Allen, who remain committed and supportive.

“We plan to expand our grass roots fundraising events to help people down the street, across town and around the world. We work toward a better future but we put the money to work right away” added David.

For more information on the Lazy Bear Fund, and tickets (bear tags) for next year’s event, visit their website here.  Also check them out on Facebook and Instagram.

MPact @mpactglobal
Saturday, March 28th, 2020 at 10:30am
“We need to make sure that people living with HIV are able to continue getting the care that they need and those programs are going to need to adapt to this new environment.” - @AIDSInstitute #COVID19 https://t.co/CJ2MciWyZ3
View on Twitter
1
3

MPact @mpactglobal
Wednesday, March 25th, 2020 at 10:01am
Grateful to see this community guide from our partners at @ITPCglobal which answers fundamental questions like:
What is is #COVID19 and how do you get it?
How can it be prevented and what if you feel ill?
How do you get tested and how is it treated?
https://t.co/f8sG3hY8tI
View on Twitter
1
1

MPact @mpactglobal
Monday, March 23rd, 2020 at 2:06pm
Never disclose sexual behaviors if you feel this could put you or your partners at risk of violence, stigma, or discrimination. We cannot rely on index testing in countries where homosexuality is still criminalized https://t.co/wqfodT9dyf
View on Twitter
1
2

MPact @mpactglobal
Saturday, March 21st, 2020 at 11:40am
A global crisis like #COVID is an especially important time to pay attention to the needs of vulnerable communities like #LGBTI people who may not have equitable access to safe and quality health services https://t.co/SKVGUBnCO6
View on Twitter
3
1

MPact @mpactglobal
Saturday, March 21st, 2020 at 11:40am
In times of crisis, we must always rely on community first. What public health professionals know best is that the only way to fight a pandemic like #COVID19 is if we do it together @mngreenall https://t.co/45eBRUma04
View on Twitter
1
1

MPact @mpactglobal
Friday, March 20th, 2020 at 12:40pm
We must fight discrimination in all its forms. We cannot ignore the abuse of human rights against LGBTI people around the globe https://t.co/Nn8vzbWYTa
View on Twitter
1
3

MPact @mpactglobal
Thursday, March 19th, 2020 at 12:25pm
It's not too late to take the #GMHR2019! Add your voice to the thousands of gay and bisexual men (including transmasuculine, queer, and nonbinary people!) who have taken this important global survey. Make your voice heard! https://t.co/oBm8aYXwzc
View on Twitter
0
0
Menu