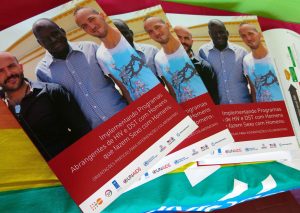 Exciting news out of Latin America!

After being translated from English, the first Portuguese version of the MSM Implementation Toolkit (MSMIT) is now available in print. Long time MSMGF partner SOMOSGAY will be launching the publication in Brazil during Gay Latinos’ upcoming National HIV Congress. Nearly 5000 public health experts, public health officials and other advocates will gather for this important event.

The Gay Latinos network will be using MSMIT to train constituents during their national forum in Brazil from September 24-26, in collaboration with local partners of the National LGBT Union and supported by Grupo Dignidade, Aliança Nacional LGBTI and ABGLT.

SOMOSGAY, the organization that hosts the secretariat of Gay Latinos, is a leading network in Latin America on the HIV response. As a member of the Consortium of MSM and Transgender Networks, SOMOSGAY is working to build a supportive, pluralistic, democratic, equitable and inclusive Paraguayan society in which lesbian, gay, bisexual and trans live happily with full equality in their homes, schools and workplaces.

The MSMIT is a practical guidance for implementing comprehensive HIV and STI programs with gay, bisexual and other men who have sex with men. It is currently available as a PDF in English, French, Spanish, Russian and Portuguese and online as a series of videos as a part of MSMGF’s CPR Online Learning Platform.

We wish SOMOSGAY, Gay Latinos and their partners the best of luck in their work! It’s a testament to the importance of global partnerships, and unified advocacy in the HIV response.

MPact @mpactglobal
Tuesday, January 28th, 2020 at 6:20pm
Scholarship and program submission deadlines for the @HIV2020 are fast approaching! Don't miss your chance to be part of this important convening of community leaders working togehter to #RelcaimTheResponse https://t.co/NcqknmWm9S https://t.co/tsBsFv2WDJ
View on Twitter

MPact @mpactglobal
Monday, January 27th, 2020 at 5:43pm
The people who are best equipped to prevent drug overdoses are drug users themselves! We're working with @DOPEproject @HarmReduction @comebystjames to provide our community with the resources they need #AnalAboutMyHealth #HarmReductionWorks https://t.co/eQcGhc4o4B
View on Twitter
7
7

MPact @mpactglobal
Sunday, January 26th, 2020 at 11:50am
A recent crackdown on #LGBTI people in #Indonesia is affecting queer-owned businesses and limit safe spaces in the country https://t.co/FYhadZF7HT
View on Twitter
0
2

MPact @mpactglobal
Saturday, January 25th, 2020 at 11:50am
It's time to repeal antiquated and discriminatory laws that create barriers in health for gay and bisexual men. Kudos to our partners in #Denmark! https://t.co/LsWNfwJKLr
View on Twitter
4
5

MPact @mpactglobal
Friday, January 24th, 2020 at 2:45pm
One week left to apply for a scholarship or to submit a program to the @HIV2020 Conference this July! Make your voice heard and be a part of this important conference to #ReclaimTheResponse. Learn more here: https://t.co/fIbE8Xsy2j
View on Twitter
6
9

MPact @mpactglobal
Thursday, January 23rd, 2020 at 12:45pm
LGBTQ advocates all over the world face discrimination, violence, and threats to their security for the work they do. #KnowYourRights and equip yourself with the resources you need to continue to do your work safely. https://t.co/khENkEeyOs
View on Twitter
1
3

MPact @mpactglobal
Sunday, January 19th, 2020 at 11:50am
The success of #HIV interventions in the UK is a testament to the power of a community-led response! https://t.co/PhM1vkSxbC
View on Twitter
1
7