In March, MSMGF attended a three-day Learning Institute in Bishkek, Kyrgyzstan. The Learning Institute was entitled, “Building Resilient Movements” and was organized by Aids Fonds as part of the Bridging the Gaps initiative (BTG). Nearly two dozen activists from local organizations attended after applying to participate. They represented their movements of sex workers, people who use drugs, transgender people, gay and bisexual men and people living with HIV. They traveled from Botswana, Georgia, Indonesia, Kenya, Kyrgyzstan, Myanmar, Russia, South Africa, Vietnam and Zimbabwe. Two of the MSMGF’s local partners were active participants in the Learning Institute workshops, including Labrys (Kyrgyzstan) and LEGABIBO (Botswana). 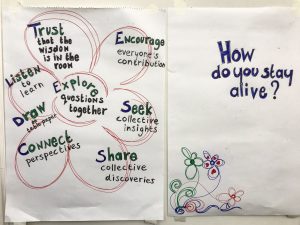 Over the course of three days, Learning Institute participants worked in small groups as well as large discussions to share the successes and challenges of their work. MSMGF contributed by serving as a designated “Listener” during these sessions, helping to reflect back participants’ priorities and strategies during the larger co-learning process.

One of the first activities was a series of rotating, small-group discussions about survival. The initial prompt for these discussions was, “What do you need to survive?” This was linked to the larger Learning Institute theme of “Building Resilient Movements.” In sharing with one another, some groups of participants decided to shift the prompt from the singular to the collective, thereby asking, “What do we need to survive?” The following highlights convey some of the shared conditions and priorities that emerged.

A concern was also raised about the limits of some donor models and the dangers of allowing donor priorities and practices to dictate the work. Again, bottom-up community-based approaches were highly encouraged, along with more flexible funding models such as BtG, and models that wed a rights-based and sexual health approaches.

During another session, Pamela Chakuvinga, of the Sisonke sex workers movement in South Africa, gave a sharply principled and deeply moving presentation of her journey and strategies in movement building. Utilizing photographs and videos from her years of collective work, she constantly invoked a sense of the we, the relationship of herself and activists to the collective, the importance of movement-building, the power of being connected and channeling the insights and priorities of others, not just an individual voice or experience. She also emphasized:

Ms. Chakuvinga is particularly adept at code-switching. She consistently weds the formal speak and jargon of donors and public health officials with the vitality and wisdom of on the ground movements and action. This strategic agility resonated with other Learning Institute participants, who noted in her work a range of best practices they could adapt and carry forward with their own local movements. These included:

In addition to small group workshops, individual case studies and large group discussions, the Learning Institute also featured opportunities to visit local activists and service organizations in Bishkek. MSMGF local partner Kyrgyz.Indigo opened its doors to international visitors who were participants in the Learning Institute. Indigo volunteered to serve as a location for two of the site visit sessions during the Learning Institute. Indigo staff and community members welcomed visitors to their community safe home, which offers groundbreaking and vital shelter, food, peer support and service referral to young LGBT people who have been kicked out of their homes due to the transphobia, homophobia and violence of family, friends and neighbors. The shelter offers lodging for up to one month, creative and sexual health programming, mental health support, and a sense of community and belonging for people facing considerable physical dangers and emotional isolation.

During the site visits, international activists were deeply moved by Indigo’s community mobilization efforts, with one Kenyan transgender leader saying they felt like they were “home.” Along with home-cooked local food and energizing dance, the visitors and shelter residents and staff found common ground discussing the similar structural challenges they face in their lives, and the community responses that make a more vibrant existence possible. The visitors expressed interest in knowing more about the current political climate and larger legal framework for LGBT people in Kyrgyzstan. MSMGF then helped to connect the local Kyrgyz and international activists with one another over email, sharing Indigo’s new and illuminating report to help provide deeper context. The trilingual report can be found here, with the English summary beginning on p. 21.

About MSMGF
MSMGF is an expanding network of advocates and other experts in sexual health, LGBT/human rights, research, and policy, working to ensure an effective response to HIV among gay men and other men who have sex with men. We are directly linked with more than 120 community-based organizations, across 62 countries.

MPact @mpactglobal
Monday, January 27th, 2020 at 5:43pm
The people who are best equipped to prevent drug overdoses are drug users themselves! We're working with @DOPEproject @HarmReduction @comebystjames to provide our community with the resources they need #AnalAboutMyHealth #HarmReductionWorks https://t.co/eQcGhc4o4B
View on Twitter
6
7

MPact @mpactglobal
Sunday, January 26th, 2020 at 11:50am
A recent crackdown on #LGBTI people in #Indonesia is affecting queer-owned businesses and limit safe spaces in the country https://t.co/FYhadZF7HT
View on Twitter
0
2

MPact @mpactglobal
Saturday, January 25th, 2020 at 11:50am
It's time to repeal antiquated and discriminatory laws that create barriers in health for gay and bisexual men. Kudos to our partners in #Denmark! https://t.co/LsWNfwJKLr
View on Twitter
4
5

MPact @mpactglobal
Friday, January 24th, 2020 at 2:45pm
One week left to apply for a scholarship or to submit a program to the @HIV2020 Conference this July! Make your voice heard and be a part of this important conference to #ReclaimTheResponse. Learn more here: https://t.co/fIbE8Xsy2j
View on Twitter
6
8

MPact @mpactglobal
Thursday, January 23rd, 2020 at 12:45pm
LGBTQ advocates all over the world face discrimination, violence, and threats to their security for the work they do. #KnowYourRights and equip yourself with the resources you need to continue to do your work safely. https://t.co/khENkEeyOs
View on Twitter
1
3

MPact @mpactglobal
Sunday, January 19th, 2020 at 11:50am
The success of #HIV interventions in the UK is a testament to the power of a community-led response! https://t.co/PhM1vkSxbC
View on Twitter
1
7

MPact @mpactglobal
Tuesday, January 14th, 2020 at 1:35pm
Drugs! You've done them, and so have we! We're having an open and honest discussion about drug use and harm reduction in the latest video from #AnalAboutMyHealth with our friends at @testmeSF @comebystjames and @INPUD https://t.co/EHrAfTU7LN
View on Twitter
4
10
Menu