What is being discussed now at the High Level Political Forum?

On Wednesday June 12th, the High-Level Political Forum (HLPF) on Sustainable Development conducted an in-depth review of Sustainable Development Goal (SDG) 3:  Ensure Healthy Lives and Promote Well-Being for All at All Ages. In its second year, the HLPF is the central platform for Member States to review progress towards “Agenda 2030” – economic, social, and environmental sustainable development, founded on the principle of “leave no one behind.” 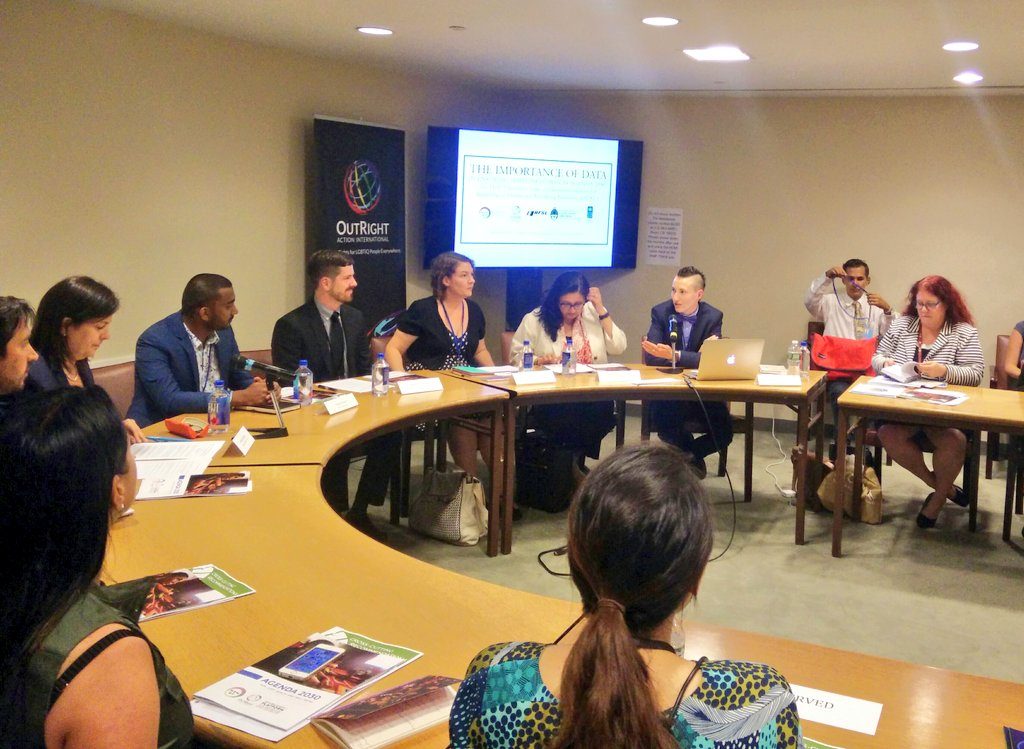 MSMGF is attending meetings at UN Headquarters in New York all week with the express purpose of monitoring Member States’ commitments to LGBTI inclusion and the global HIV response. We are calling on countries at the HLPF to recognize and address the impact of stigma, discrimination, violence, and criminalization on the health of key populations during this critical event.

This week’s reviews included a panel of experts to examine the bottlenecks to national implementation of SDG 3, as well as key emerging issues, lessons, and best practices. SDG 3 is the main entry point for HIV-related monitoring and advocacy in the context of Agenda 2030 for Sustainable Development,[1] due to the agreed upon Target 3.3 (End AIDS by 2030) and accompanying Indicator 3.3.1 (Number of new HIV infections per 1,000 uninfected population, by sex, age and key populations[2]). MSMGF has been following this session and has identified three key barriers to realizing the goal of “leave no one behind” in SDG 3, as outlined below:

Despite Target 3.3 and Indicator 3.3.1, not one of the 44 countries participating in Voluntary National Reviews (VNR) this year included incidence data disaggregated by key population, and few VNR reports mentioned gay, bisexual and other men who have sex with men, transwomen, or lesbian, gay, bisexual, transgender, and intersex (LGBTI) people in a comprehensive way.

Collecting and disaggregating data on LGBTI people’s health is a persistent challenge for Member States, as national statistical agencies, health ministries, and other government bodies do not know how to respectfully and responsively ask for these data. As illuminated in our recent publication, Agenda 2030 for LGBTI Health and Well-Being, Member States must collaborate with community-based and LGBTI-led organizations to gather these data and commit to monitoring the health and well-being of LGBTI people.

During the SDG 3 discussion on Wednesday, Indonesia, Sudan, the Indigenous People’s Major Group, and others mentioned the lack of comprehensive data as a key barrier to health in development. SOGIESC disaggregated data must be collected through routine health surveillance data in:  HIV incidence; mental health; alcohol and drug use; reproductive health care; smoking; exercise and obesity. The scope and strength of available data often determines the financing that initiatives can attract. Nowhere is that truer than in the health field, where evidence-based health policy is meant to be based on epidemiological and clinical data. International donors and governments use the lack of data on LGBTI populations to justify underinvestment.

Malaysia, Nigeria, and Rwanda mentioned the necessity of consulting community groups and civil society in implementing health programs. Community-based and LGBTI-led organizations are often best positions to respectfully gather data on our communities, and in the short-term, these organizations are best poised to assist in the development of surveys and other methods for Member States to collect evidence that reflects health disparities.

2. Addressing the negative impact of stigma, discrimination, violence, and criminalization

Improving the health and well-being of everyone requires focusing on populations that have been left behind and, in many contexts, are actively criminalized and persecuted. Our review of available research indicates that a pressing bottleneck to implementing SDG 3 for our communities is discrimination, violence, criminalization, and social exclusion based on sexual orientation, gender identity and expression, and sex characteristics (SOGIESC). These factors are the social determinants for negative health outcomes among LGBTI people, and Member States must meet their obligations to ensure LGBTI people are not left behind in Agenda 2030.

It was heartening to hear several Major Groups and other Stakeholders the negative impact of stigma, discrimination, and violence on realizing SDG 3. The Netherlands stated that the root causes of inequality, violence, and discrimination must be tackled to achieve SDG 3, and the EU Delegation commented that efforts to implement SDG 3 must respect human dignity.

However, missing from this discussion was the explicit impact of punitive laws that criminalize same-sex behavior, inhibit self-determination of gender identity, and impose higher age of consent. Data shows mental health is worsened by anti-LGBTI laws:  a review of criminalization of same-sex conduct between women in 44 countries asserts that the effects on lesbian and bisexual women include mental health issues and suicide; a study of men who have sex with men in Russia found that depressive symptoms are associated with homosexual identity and experience of stigma and imprisonment, and these experiences have been exacerbated by the passing of anti-gay propaganda laws. Criminalization is also a key determinant in health care access, as fear of arrest has a strong negative association with access to HIV prevention and care services.

Any initiative to “leave no one behind” and address the health needs of all people must meaningfully engage LGBTI communities. From assessment and design to implementation and evaluation, all aspects of health and development programming must involve LGBTI community organizations to ensure interventions are tailored, appropriate, and effective.

Exclusion of gay and bisexual men and transwomen, as well as vulnerable lesbian and bisexual women, from national AIDS planning processes has contributed to inadequately funded, inaccessible, and poorly targeted programs. National HIV prevention and treatment programs struggle to reach and respectfully serve gay, bisexual and other men who have sex with men, most likely due to substandard technical capacity and low political will to openly address the sexual and reproductive health needs of gay and bisexual men. This also creates an environment in which programs led by and intended for LGBTI communities are contested, defunded, or undermined.

In the discussion on Wednesday, Cuba called on developed countries to exhibit the political will to commit to funding health initiatives in developing countries. These funding endeavors must include requirements for funding to community-based and LGBTI-led organizations, as health systems are often unable to reach these most impacted communities.

Provision of safe spaces and social support, and promotion of community coherence, participation, and inclusion can help to reduce the spread of HIV among men who have sex with men. Community support, such as gay- and bisexual-specific health promotion, can have positive impacts such as encouraging condom use through education and sex-positive messaging. Service utilization may also be optimized when delivered by community-based organizations that are led by gay or bisexual men. Communities will require increased resources, capacity development, and expanded opportunities to strategize and lead in the HIV response

As the first week of the HLPF comes to a close and the review of thematic SDGs ends, MSMGF expects oral remarks from Member States participating in the VNR process to address these crucial bottlenecks in an honest and open way. Member States must take responsibility for setting out a plan to collect complete and disaggregated data, addressing discrimination, violence, and criminalization, and actively involving LGBTI community groups. Without these commitments, LGBTI people will continue to be left behind.

For reference, download the latest publication from MSMGF and Outright Action International: Agenda 2030 for LGBTI Health and Well-Being

MSMGF will be continuing working in close consultation with UN Member States and civil society networks. We will continue to keep our constituents informed about outcome of the HLPF and future next steps.

Not in NYC? No UN badge? Follow the UN’s Live Webcast &  #HLPF2017 on Twitter and learn about your country voluntary national review

Read more about the HLPF here

[1] The Sustainable Development Goals are meant to be comprehensive, interlinking, and designed to “leave no one behind,” so a variety of additional Goals are highly relevant to the health of LGBTI people: Goal 1 (End poverty in all its forms everywhere); 4 (Ensure inclusive and equitable quality education and promote lifelong learning opportunities for all); 5 (Achieve gender equality and empower all women and girls); 8 (Promote sustained, inclusive and sustainable economic growth, full and productive employment and decent work for all); 10 (Reduce inequality within and among countries); 11 (Make cities and human settlements inclusive, safe, resilient and sustainable); and 16 (Promote peaceful and inclusive societies for sustainable development, provide access to justice for all and build effective, accountable and inclusive institutions at all levels).

[2] According to the 2015 UNAIDS Terminology Guidelines, key population groups “often suffer from punitive laws or stigmatizing policies, and they are among the most likely to be exposed to HIV.” Key populations include gay men and other men who have sex with men, sex workers and their clients, transgender people, people who inject drugs, and prisoners and other incarcerated people. See more at http://www.unaids.org/sites/default/files/media_asset/2015_terminology_guidelines_en.pdf.

MPact @mpactglobal
Tuesday, May 11th, 2021 at 12:10pm
As restrictions are lifting in parts of the world that have managed to contain the spread of #COVID19, it is important not to forget that we are still living in the middle of a pandemic. 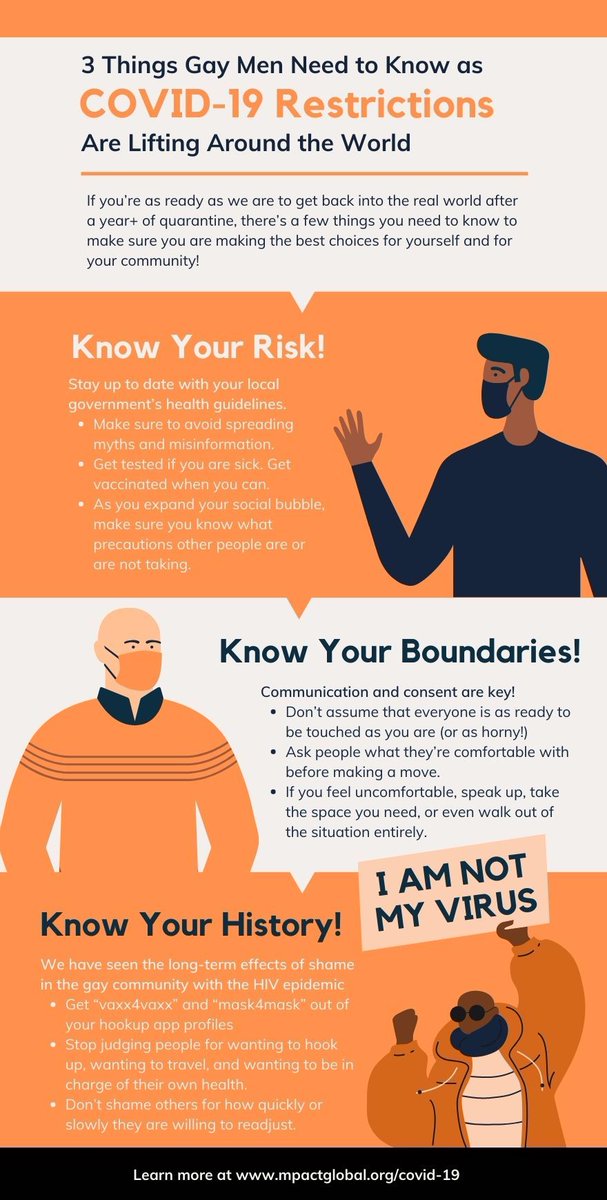 MPact @mpactglobal
Monday, May 10th, 2021 at 12:20pm
Last year we trained over 7776 key population advocates from around the world.

Learn more about MPact in our 2020 Annual Report: https://t.co/p9uQhBCr0Z https://t.co/DUbMQT4WRk
View on Twitter 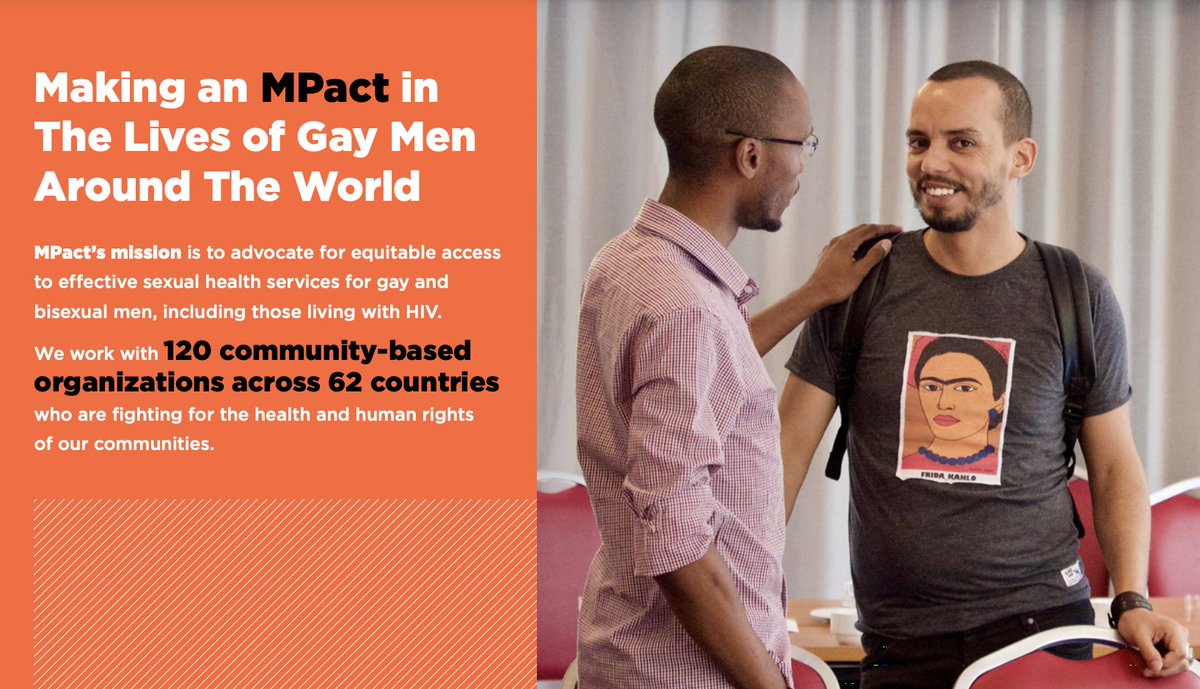 MPact @mpactglobal
Sunday, May 9th, 2021 at 12:20pm
O’Connell co-founded Visual AIDS with the goal of creating awareness campaigns to encourage people to discuss #HIV and understand its impact https://t.co/hnmb8AW3uq
View on Twitter
3
6

Honor them by submitting a video to #LGBTEldersDay https://t.co/vBtKMV2pqd
View on Twitter
2
3

MPact @mpactglobal
Friday, May 7th, 2021 at 12:20pm
In his first book, @obanos tells the story of migrating during the time of the civil war in El Salvador, and coming to terms with his sexuality in the diaspora of Los Angeles. https://t.co/Y5eHIUQqPC
View on Twitter
0
1

MPact @mpactglobal
Saturday, May 1st, 2021 at 12:35pm
Representation matters! Over the past decade, activists in the region have noticed that people are increasingly willing to come out and to talk about and campaign for LGBT issues and rights https://t.co/cJ6zH9kW6u
View on Twitter
3
2
Menu