In his first book “Las luciérnagas quizá no volverán”, MPact’s Director of Training & Technical Assistance Omar Baños tells the story of his childhood — of migrating to the United States during the time of the civil war in El Salvador, and coming to terms with his sexuality in the Salvadoran diaspora of Los Angeles.

You can now read the story on Kindle or in paperback.

We sat down with Omar to talk about his memoirs, his love of writing, and how his story has impacted his work here at MPact.

MPact: Hi Omar! Congratulations on finishing this amazing project. I know you’ve written fiction and poetry in the past, is this the first time you’ve told your own story? What was that like?

Omar Baños: In a way, my personal story can be found in almost everything I have written. Writing is a very intimate experience for me, even when I am writing about other people. But my memoirs are the first collection of personal stories woven to tell a fuller tale, although I still have more stories to tell.

I started writing my memoir 12 years ago as an exercise in a writing group that a couple of friends and I had formed. We were writing short essays on our own immigrant experience and sexual identity.  I stumbled in the process. I felt I needed to write about my childhood for the present to make more sense. Who are we without our past? One of my friends, Laura Isabel Figueroa, and I embarked on this project and wrote and workshopped it for many years. We both published our memoirs last summer  In her book, De la opresión a la liberación: Una historia real de resilencia, amor y sanación, Laura writes about her experience of coming out as a Lesbian woman to her family and overcoming her fears and traumas as an immigrant. I highly recommend it.

M: Obviously immigration is still a huge topic of conversation in the United States and all over the world. What’s something that you wish people understood about the lives of immigrants? 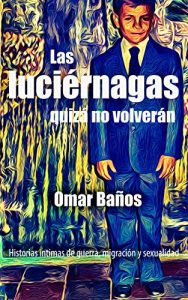 OB: Our lives are not monolithic.  The lives of immigrants are so vast, simple, yet complex. In my own experience, I’ve learned that a million reasons, context, socioeconomic status, and dreams that pushed us to leave the place we knew, the people we loved, shaped us in so many different ways. Nonimmigrants – that is, people who have never migrated, not even within their own country – only see one thing: that immigrants come to invade their country and steal their jobs. It is a very simplistic way of understanding the lives of anyone, really. They are obviously to the context that pushed people to leave. It is understandable to have that limited view of the other when you have never had to go to bed in the middle of a civil war or when you have not had to endure the killing of your friends and family because of socioeconomic and political violence. Immigrants, anywhere, have so much to contribute.

M: In the book you tell the story of why you refused to learn English when you came the U.S., and the book itself is in Spanish. Can you tell us why you made that choice, and why you’re passionate about writing in your native language?

OB: I really did not want to be in this country. It was not my dream. Most of my friends had this big dream of moving to the U.S. But not me. But eventually, I learned the language in High School. In two years, I could fully comprehend English but not speak fluently because of that self-imposed resistance to learning the language.

I decided to get a BA in Spanish Literature at Occidental College.  It was a way to honor my past. I wanted to be a Spanish teacher. That didn’t pan out because I ended up taking a different road.  I decided to write the book in Spanish because most of my creative writing is in Spanish. It was natural for me to do that. And I am passionate about writing in Spanish because, as an immigrant living in the US, I think it also sends the message that we do not have to tell our stories only in English.

M: You also discuss coming to terms with your sexuality while living in the United States. Do you think your journey of self-acceptance was different because you went through your adolescence in Los Angeles?

OB: Yes, definitely.  This is one of the central themes in my memoirs. I reflect on what it would have been like for me to come to terms with my sexuality in El Salvador in the 90s. We are talking about 25 years ago. I had been exposed to so many beautiful and different things in college in the US and my study abroad experience in Madrid, Spain. Had I stayed in El Salvador, it is 99% likely that I would not have gone to college and would not have been exposed to sexual diversity and to “otherness” in general enough to understand my own identity.

I get it when young people say, “God, I wish I could move to *name the country* to be completely free and be myself.” Not because they hate the place they live, but because they cannot live the lives they want in a place they love. Then again, I did not move to the US because of my sexual identity.

M: How did you end up in advocacy work? How do you think your background and your upbringing has impacted the work that you do today with MPact?

I moved back to El Salvador in mid-1998, after graduating from college, to work as an administrative assistant in a research project that was studying knowledge transfer and migrants. Nothing to do with my academic background. Nothing to do with LGBT issues. I had a lot of free time after work in San Salvador, the capital. I wanted to meet other gay men and make friends. So, I eventually found out about the only LGBT organization in the country back then and decided to visit.  I ended up attending weekly gatherings they had and made some friends. Talks were about HIV, STI, sexuality – you name it. I because more aware of the human rights abuses, of the violence, of the inequality based on our sexual orientation. I had not experienced any of this in Los Angeles. But I did in El Salvador. I share these experiences in my book. I ended up joining the Board of the organization and volunteered to organize a weekly group for young gay men.

My personal history helps me relate to the global work, that it is really very local. I am always thinking, how will this idea, project, initiative, resource be interpreted in this other context. That helps us understand the hesitation or excitement of the people we work with in such different contexts.

M: What do you see as the biggest issue facing gay and bisexual men around the world these days?

OB: I know the standard answer is homophobia, stigma, discrimination, HIV, and violence. It is all true. But I think that kind of an existential threat facing gay and bisexual men is the spurious understanding of Memoria Histórica – lack of understanding, acknowledging, and building on the struggles, the fights, the deaths that have made it possible to have a quasi-safer environment in some context. In general, younger gay and bisexual men do not have a deep understanding of that history. That is problematic. We need to know our story, cherish it, and acknowledge it and do our best to build on it to create a better future for all.

For more information and to read his blogs in Spanish, you can visit his personal website at www.omarbanos.com

MPact @mpactglobal
Saturday, May 1st, 2021 at 12:35pm
Representation matters! Over the past decade, activists in the region have noticed that people are increasingly willing to come out and to talk about and campaign for LGBT issues and rights https://t.co/cJ6zH9kW6u
View on Twitter
3
2

MPact @mpactglobal
Thursday, April 29th, 2021 at 11:35am
"“We are not vulnerable or marginalized. We are not numbers or statistics. We are people." - MPact Board Member @juliankerbo of @MENAPlusNetwork

See what our partners around the world had to say at last week's Multi-Stakeholder Hearing on HIV #WeAreHLM https://t.co/Uw75tSV2ep
View on Twitter
2
5