Member States must address pervasive stigma and discrimination on the road to realizing universal health coverage. States should responsibly and sustainably invest in human rights and key populations programming, as well as fully maximize opportunities at UN mechanisms to be accountable to HIV-related human rights and development commitments. 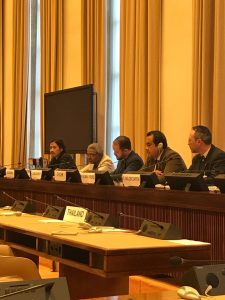 As gay men and other men who have sex with men, people who use drugs, sex workers, transgender people, and people living with HIV, we have always known that HIV is a virus that thrives off inequities and is fueled by violations and abuse.

Key populations have fought with fierce urgency for respecting, protecting, and fulfilling human rights as a central pillar in the response. Human rights approaches to the HIV response requires targeting stakeholders that operate at multiple levels. This has included addressing stigma and discrimination suffered by key populations and people living with HIV, advocating for the repeal of punitive and discriminatory laws, and challenging donors to responsibly and sustainably invest in programs directed to affected communities.

However, some governments, private sector stakeholders, and even health ministries are still reluctant to make a connection between human rights and HIV. Some States have shirked their responsibilities to a well-funded, rights-based response to HIV by deprioritizing structural-level interventions, such as developing and enacting protective laws and policies. Indeed, biomedical interventions such as PrEP have created a level of complacency among governments that HIV can be contained through public health and biomedical responses alone.

In tandem with this trend, the positive push to achieve Universal Health Coverage (UHC) could accelerate progressive realization of the right to the highest attainable standard of health, but the integration of HIV services into UHC also runs the risk of reversing years of effective responses to HIV if health systems fail to adopt a rights-based approach, a strong community response, inclusive civil society monitoring mechanisms, and effective ways to meet the needs of key populations. Unless States take specific measures, the move to expand UHC will undermine global progress toward the end of AIDS, particularly because biomedical and mainstream approaches to health run the risk of leaving people behind, especially people that are affected by larger power structures and inequities, which disadvantage, marginalize, and criminalize them. In fact, so-called “AIDS Inc.” often reinforces these dynamics, which is why we are calling for an HIV2020 for all.

On 12-13 February, as mandated by Human Rights Council Resolution 38/8, the Office of the High Commissioner of Human Rights (OHCHR) organized a consultation inviting speakers from civil society, governments, multilateral institutions, national human rights institutions, and donors to explore regional and sub-regional strategies and best practices to address human rights in the HIV response. OHCHR will produce a summary report describing the interventions at the Consultation, to be presented during the 41st Human Rights Council session in June-July this year. 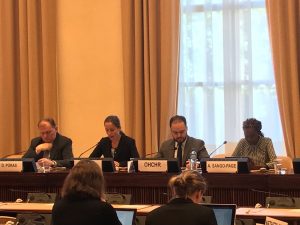 Prior to the OHCHR Consultation, MPact sought inputs from community members for instances of violations across a spectrum of human rights issues. MPact also worked with global key population networks in the Free Space Process* to develop a briefing paper outlining three key concerns with regard to human rights in the HIV response:  how widespread and systematic discrimination in the fulfilment of human rights for PLHIV and key populations undermines the expansion of Universal Health Coverage; the human rights responsibilities of donors transitioning out of some countries (or more accurately called “terminating” funding); and the important role of human rights mechanisms and reviews of sustainable development goal implementation in holding States accountable to their obligations to end AIDS.

The full briefing paper presents research and evidence to speak to these three challenges, as well as international laws and norms that outline the obligations that States have to safeguarding the human rights of people living with and affected by HIV. Regional and sub-regional strategies must take into consideration the implications of the move to UHC given stigma and discrimination, responsibilities for protecting rights when donors terminate funding, and ways to more effectively utilize accountability mechanisms.

Below are some of the key recommendations from the briefing paper:

MPact and partners will continue to work with Member States, multilateral agencies, and civil society organizations to monitor developments in these areas, and ensure that human rights are respected, promoted, and fulfilled for all.

*The Free Space Process is funded through the Partnership to Inspire, Transform and Connect the HIV response (PITCH).

MPact @mpactglobal
Sunday, April 11th, 2021 at 12:25pm
A huge set back for LGBTI people in #Arkansas and a sign that our fight for our basic human rights here in the US is far from over https://t.co/sc7G2iMVLp
View on Twitter
0
2

MPact @mpactglobal
Saturday, April 10th, 2021 at 12:25pm
Exciting new out of #Angola but there is still much work to be done to ensure that #LGBTI people are protected and empowered in the region https://t.co/Otrl23h0Ps
View on Twitter
0
2

MPact @mpactglobal
Friday, April 9th, 2021 at 12:25pm
"We must ensure that we are putting inadequately served populations at the center of our response” - MPact Community Mobilization Manager, Johnny Tohme https://t.co/wCIqlYRiRJ

MPact @mpactglobal
Wednesday, April 7th, 2021 at 6:38pm
“As gay men we manage risk all the time. Will this trick beat me up? Will I get HIV? Will I get syphilis? We already have the skills to survive a pandemic. We did, and we’re doing it. We’re flexible; we adapt.” - @Aspield https://t.co/P72eCw1gRo
View on Twitter
5
10

MPact @mpactglobal
Wednesday, April 7th, 2021 at 10:25am
Last year at MPact we reached:
- 15,575 people with funding for sexual health services
- 794 service providers with trainings on LGBTI issues
- 7776 advocates with resources for key populations
& so much more!

MPact @mpactglobal
Tuesday, April 6th, 2021 at 3:55pm
Check out our list of recommendations for @PEPFAR about what communities want to see from the Key Population Investment Fund #KPIF https://t.co/KOsqk5nszo
View on Twitter
1
0
Menu