As we inch closer to achieving global targets in HIV prevention, we remember how far we have come in fighting this epidemic and all the work that there still is to be done.

Overall, the odds of having HIV infection are markedly and consistently higher among gay and bisexual men and other men who have sex with men than among the general population in adults of reproductive age in every region and country in the world. The reasons for heightened vulnerability to HIV stem from violations to the right to health and are driven by stigma, discrimination, and violence.[i],[ii],[iii],[iv] 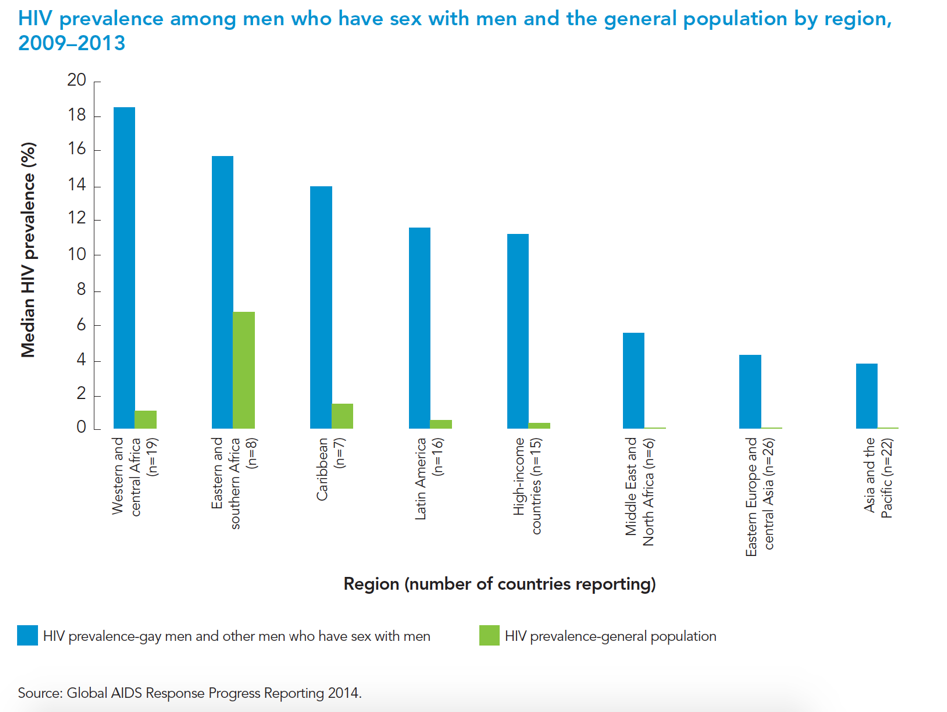 According to the 2016 UNAIDS Gap Report, the risk of HIV acquisition for gay men and other men who have sex with men is 24 times more likely than compared to adults aged 15 years or older in the general population.

UNAIDS reports that there are 1.8 million [1.6 million – 2.1 million] people who became newly infected with HIV in 2016. Gay men and other men who have sex with men are disproportionately represented among new infections, with an estimated 12% of new infections attributed to gay men in 2015. 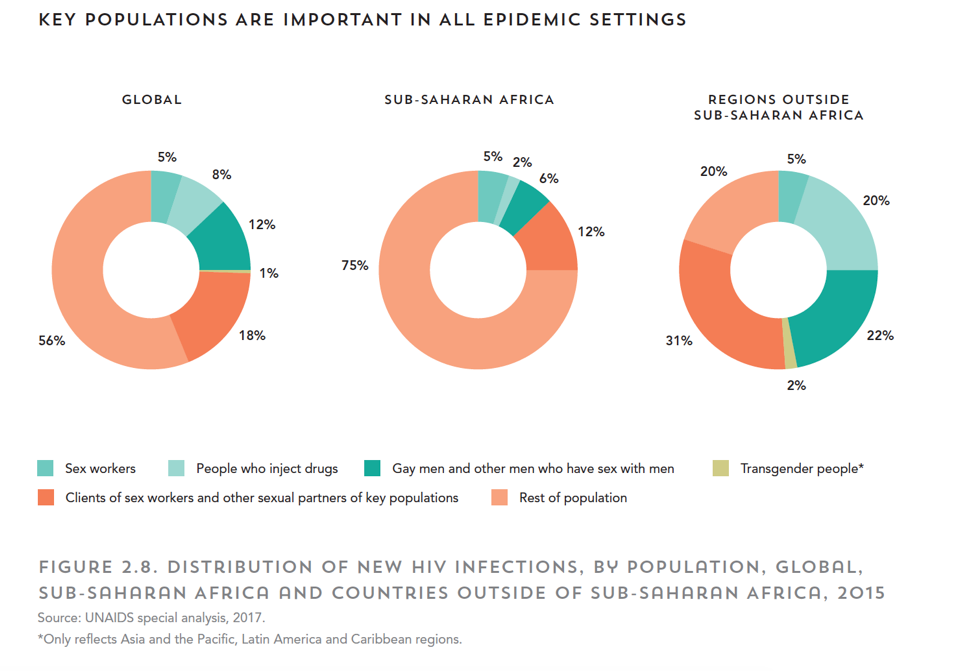 Since 2010, new HIV infections among adults have declined by an estimated 11% globally.  However, among men who have sex with men, the opposite is true—incidence is stagnant or rising for gay men in most regions across the world.[v],[vi],[vii],[viii]

In 2016, only 53% [39–65%] of all people living with HIV had access to antiretroviral treatment globally. Data on treatment coverage among gay and bisexual men is almost non-existent because governments refuse or don’t know how to safely and respectfully collect and report this data. The little data that is available comes from standalone studies, which suggest low treatment coverage.

Despite these troubling trends, HIV prevention and treatment services for gay men remain severely under-resourced. It is estimated that less than 2% of global HIV prevention funding is targeted towards men who have sex with men. As a result, HIV prevention services only reach approximately 10% of gay men worldwide.

Investment in country-based HIV services rarely reflect the reality of who is most impacted by the epidemic:  funding for key populations is consistently less than programming for the general population. What programs do exist often do not sufficiently meet the unique needs of men who have sex with men, transgender women, sex workers, and people who use drugs. Investment and support on a global scale is critical for the empowerment of key populations to exert ownership over the design and delivery of services to communities.

Stigma, discrimination, and exclusion continue to impede access to essential services and prevent meaningful political commitments to the health and HIV needs of gay and bisexual men. Same-sex relations remain criminalized in over 70 countries, which further deters gay and bisexual men from accessing HIV services. It is essential that the human rights of all key populations are protected and fulfilled first and foremost in the global response to HIV.

This year and every year on World AIDS Day, we remember the lives lost to this epidemic and the voices of those who stood against it. Gay men living with and affected by HIV have been the champions of this fight since the very start. MSMGF works to amplify their voices.

With advances in biomedicine and mobilized communities, we are closer to achieving global targets in epidemic control than ever before. However, until we are able to eliminate structural barriers and provide easy access to life-saving medicines, social services, and basic care for those who need it most, we will not see an end of AIDS. Health is a human right that must be upheld. As gay and bisexual men, we must continue to empower, educate, and support ourselves and each other in our work against AIDS.

[iii] Smith, A.M., Grierson, J., Wain, D., Pitts, M., Pattison, P. (2 December 2004). Associations between the sexual behaviour of men who have sex with men and the structure and composition of their social networks. Sexually Transmitted Infections, 80(6): 455-8.

MPact @mpactglobal
Thursday, September 17th, 2020 at 11:15am
With #COVID19, it's important to stay informed, to reach out for support, and prioritize self- and community-care.

Be sure you're getting accurate information from reliable sources, how it spreads and where you can get health services https://t.co/8yybI31Vea
View on Twitter
1
2

MPact @mpactglobal
Wednesday, September 16th, 2020 at 11:15am
Men living with #HIV in countries where sex between men is criminalized were twice as likely to say they had poor access to health care

More data from the #GMHR here: https://t.co/IgOC0LBlIV
View on Twitter
4
8

Which sessions are you most excited for? We're looking forward to this important conversation on the future of key population funding with our partners at Bridging the Gaps https://t.co/upyuBhLnpj
View on Twitter
1
4

MPact @mpactglobal
Sunday, September 13th, 2020 at 10:25am
With stories from Malawi, South Africa, Egypt, Russia, India, Mexico, and the Palestinian territories, this new piece of journalism is a landmark study of unprecedented frontiers in the battle for #LGBT and civil rights https://t.co/rzTcLIZ5Zo
View on Twitter
0
0

MPact @mpactglobal
Saturday, September 12th, 2020 at 9:25am
Nobel and Oscar-winning artists in #Poland were among the 70+ signatories in an open letter addressed to the European Commission President voicing outrage at “repressions directed against the #LGBT+ community” https://t.co/W9tdV0ndvW
View on Twitter
0
2

MPact @mpactglobal
Friday, September 11th, 2020 at 7:20pm
PrEP has completely changed the way we think about HIV & AIDS, but not everyone has access to this life-saving intervention.

We've compiled case studies from 7 countries rolling out and scaling up programs on #PrEP - Check out our latest publication here! https://t.co/egWXm5f0uj
View on Twitter
2
2

MPact @mpactglobal
Thursday, September 10th, 2020 at 1:35am
Thank you @ayadog1 for your years of commitment to the sexual health and human rights of gay men around the world!

The Board and Staff of MPact are looking forward to our next chapter! https://t.co/tYnUbh6eL1
View on Twitter
3
5

MPact @mpactglobal
Tuesday, September 8th, 2020 at 4:38pm
#AB2218 is on the California Governor @GavinNewsom's Desk! This bill would change the landscape for TGI people across California. We cannot let it get it veto’d!

MPact @mpactglobal
Monday, September 7th, 2020 at 12:02pm
Did you know that all of @HIV2020's sessions are available as podcasts on Soundcloud? This includes dubbed translations in English, Spanish, French, Portuguese & Russian! https://t.co/8tRldq2rpl
View on Twitter
4
6

MPact @mpactglobal
Saturday, September 5th, 2020 at 11:01am
LGBT activists in #Indonesia are working to respond to the #COVID19 pandemic in their community https://t.co/UR1KiSdpwu
View on Twitter
0
1

MPact @mpactglobal
Friday, September 4th, 2020 at 10:02am
Men living with #HIV in countries where sex between men is criminalized were twice as likely to say they had poor access to health care

More data from the #GMHR here: https://t.co/IgOC0LBlIV
View on Twitter
2
4

MPact @mpactglobal
Thursday, September 3rd, 2020 at 10:01am
Watch highlights from all of our August sessions and stay tuned for more important discussions on key population health and rights through the month of October!

All of our virtual sessions are recorded and dubbed in five languages! #ReclaimTheResponse
https://t.co/Yj8BqKnGRa
View on Twitter
0
1

Check out our guidelines for safer sex in the time of COVID here: https://t.co/sSLwz4WzlW
View on Twitter
4
4
Menu