As of June 1st of this year, Alex Garner has joined our team as the new Director of Community Engagement at MPact Global Action for Gay Men’s Health and Rights. We sat down with Alex to learn a little bit more about him, and to pick his brain about his vision for our new Community Engagement department.

MPact: Hi Alex! Tell us about yourself — Where are you from and what are you up to these days?

Alex Garner: Well, I’m from Los Angeles, CA (Southern California originally) but I’m currently living in Puerto Vallarta, Mexico. It’s largely due to the fact that I could work remotely last year and with the COVID shutdown it was an opportunity for a change of scenery.  I have to say it was the best thing I could have done for my mental health.

M: How did you get into the field of health and HIV? 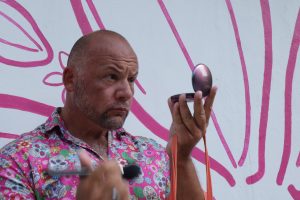 AG: I entered the field around age 20. I was the president of LGBT student group at UCSD. I was interested in HIV simply because I was a gay man who was having sex and trying to figure out what HIV meant in terms of my relationship to my sexuality. HIV was incidental to my life. It was something I was acutely aware of long before I had sex, and I was really frightened of it. Fear of HIV was an ongoing theme throughout my adolescence and young adulthood. Gay men’s health and HIV was a natural place I gravitated to because it was such a personal part of my experience. I worked in HIV prevention among gay men of color, particularly Latino gay men. I began writing then too and started writing about HIV. In the midst of all of this I seroconverted. Here I was working as a young HIV-negative, prevention advocate and then I tested positive. I came out very early about my status and some of the reactions were quite negative, I was called stupid, reckless, and irresponsible and enduring that informed my perspective around HIV and gay men’s health and stigma.

M: In the 25 years that you’ve been living with HIV, how have attitudes towards HIV shifted and what work is there left to be done?

AG: There is a lot of work left to be done but things have certainly shifted. I was fortunate enough to have the unique experience of testing positive right before antiretrovirals became available. Within a year of my diagnosis the whole world of HIV changed because of antiretrovirals.  The fact that people started to stay alive and stay alive longer radically shifted people’s relationship to HIV and their understanding of what living with HIV was about. Once people got better and the virus became less visible some people didn’t feel the need to come out. I think there is still some work to do around what it means to come out and to affirmatively declare you are living with HIV and why that’s nothing to be ashamed of and to increase representation. We have work to do within our own community between gay men in terms of their relationship to HIV and the fear and stigma that still persist in interpersonal relationships and on gay social networking apps. That’s an ongoing struggle but the good news is there are a lot more people that are able to speak out and demonstrate the complexities of living with HIV.

M: Speaking of online networks, what’s the biggest thing you learned while working at Hornet?

AG:  I was fortunate to learn a lot at Hornet. It was an incredible opportunity to marry technology and health. One of the basic simple things I realized was how valuable it was for gay men to be able to have that connection virtually with other people and it often served as a lifeline, particularly in countries that are hostile to LGBT folks. There was also something valuable about, for example, knowing that you are not the only HIV-positive person out there. That you can look on the app and find other HIV-positive people around you. It’s one thing to know other HIV-positive people exist but it’s something else entirely to know that they are living around the corner and to be able to engage with them and foster that relationship. The platform provided a space to do that. Also, the way gay men would use the app to gain information from one another, such as around PrEP or undetectable. The ability to have those conversations peer to peer and gain information was super valuable.

M: How were you first introduced to the work MPact?

AG: The MSM pre-conference in Washington DC for AIDS 2012 was my first and strongest memory of my interaction with MPact. It still remains a positive memory largely because I really believe there was an important need for MSM representation and the ability for MSM to come together and work on our issues in the context of the International AIDS conference. MPact certainly was working to fill the gap and meet the needs of the community.

M: What do you see as the biggest issue facing gay and bisexual men around the world these days? 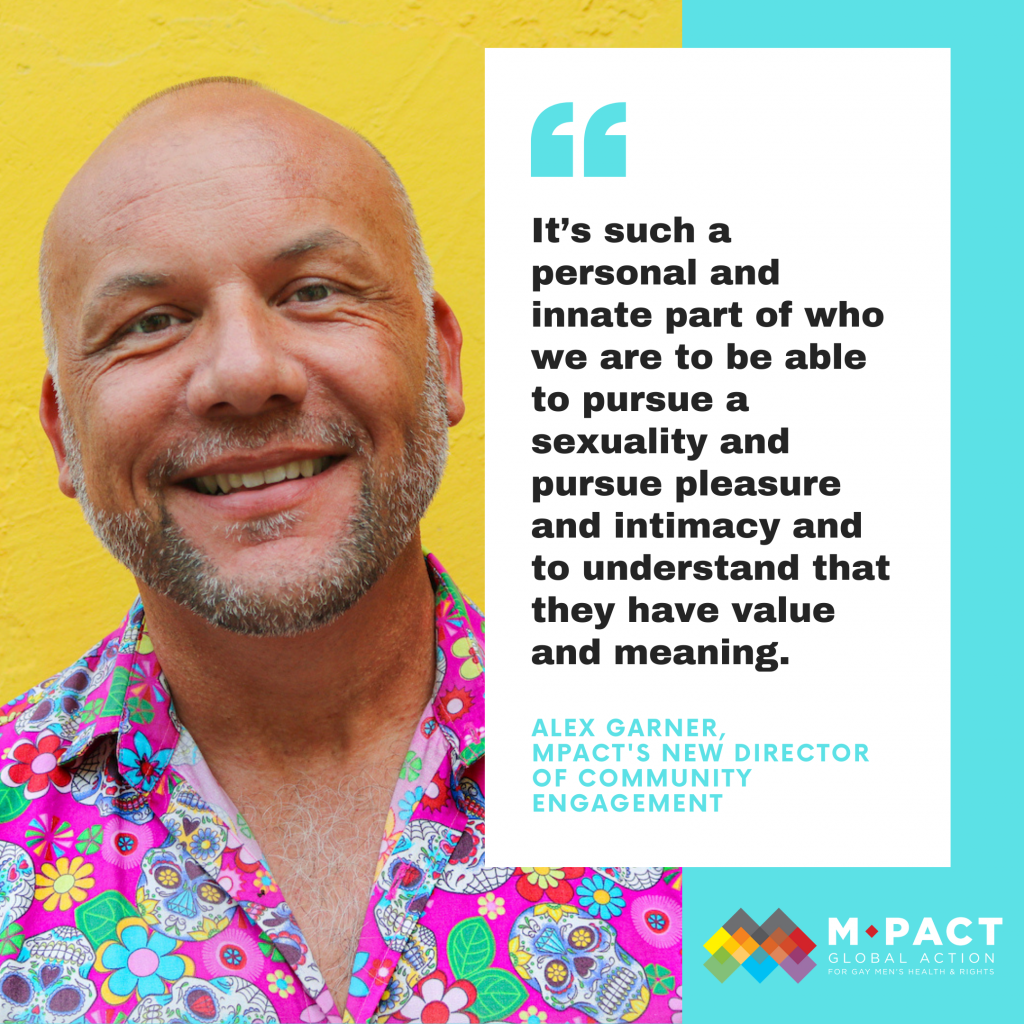 AG: Sex! I think sex is one of our biggest issues. It’s still such a taboo issue to talk about gay sex. Advancements like gay marriage have completely been desexed and gay sex is still criminalized in nearly 70 countries around the world and people are still going to jail or being arrested or tortured or murdered. It’s still something that our movements are uncomfortable with. It’s such a personal and innate part of who we are to be able to pursue a sexuality and pursue pleasure and intimacy and to understand that they have value and meaning. And there are all sorts of ways it intersects with some of the larger issues such as COVID and isolation and the need for connections or social justice movements, like Black Lives Matter, and the fundamental belief that Black and brown men have the ability to control their bodies to pursue a fulfilling sexuality. It’s all wrapped up in these intersecting issues of sexuality, race, policing, and justice. It’s innately personal to us but it’s also profoundly political. The act of having gay sex in and of itself is a political act.

M: What would be your advice for a gay advocate looking to mobilize their community?

AG:  Understanding what the needs are in your community. And those needs, if you are an individual activist, could simply be your own needs. What do you need right now? How do you translate that into advocacy or mobilization? Most of us can answer that question in terms of what we need but to be able to expand beyond that to get a sense of what the larger community around you needs and to think about if there is a particular issue or topic you are passionate about. It’s going to help sustain you, particularly as things get challenging. What are ways you can build coalition with other people working on similar issues? It’s important in terms of broadening success and maintaining the work that needs to be done.

M: What can we expect from MPact’s Community Engagement department in the next year?

AG:  We have the ability to work with community members, both at large and those who are in our networks, and we want to better understand what their needs are, figure out the best strategy to meet them, and strengthen those relationships so we can realize effective and meaningful change, whether that’s policy change or cultural shifts. There are some clear topics we want to be able to address, such as, criminalization – of gay sex, HIV criminalization, sex work, drug use. One key issue is sex. There is a lot of work that still needs to be done. It’s a great way to engage the community both in terms of our partners and every day local community members. I think that migration is one of the biggest issues of our time, outside of COVID. There is a great deal of work that I would like for us to do around this issue in terms of fostering relationships with partners and advancing or changing policy. There are all sorts of places around the globe where LGBT migrants are enduring unacceptable conditions and their rights need to be represented, uplifted, and advanced. Community engagement is twofold. There is engagement with partners and networks and then there is engagement with community members. Our strength is our ability to bridge the gap between those two.

Stay tuned for Alex’s takeover of MPact’s Instagram @mpact.global on Wendesday June 23rd where he will be answering your questions all day long! 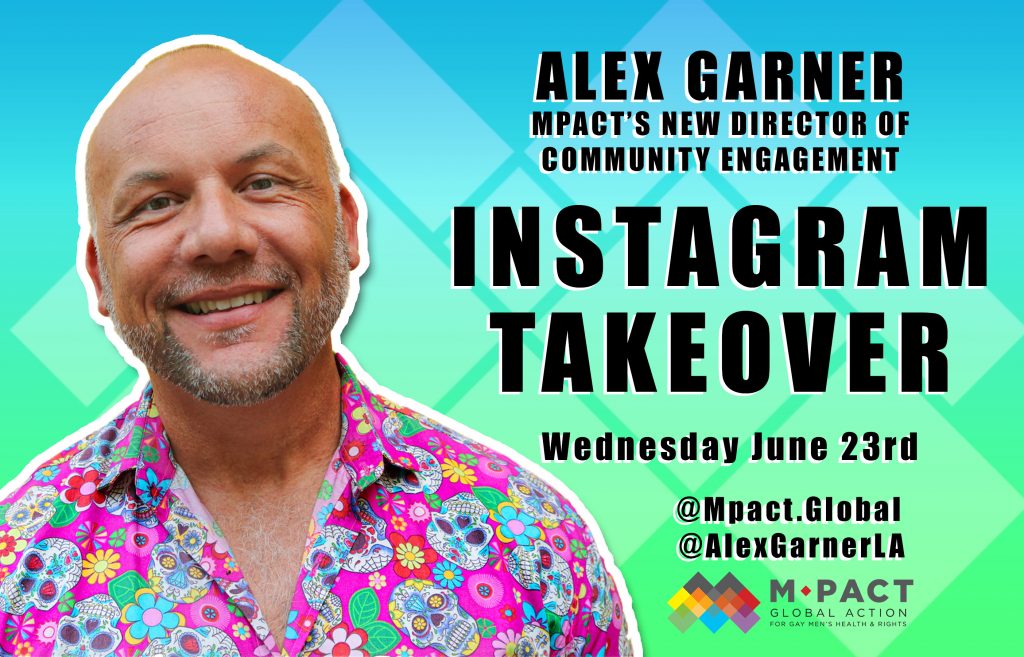