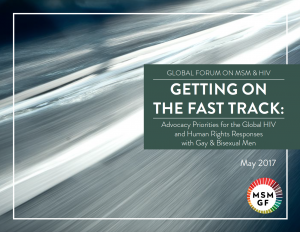 In 2015, UNAIDS introduced a set of targets to accelerate the global response to HIV. Although this has resulted in HIV incidence remaining flat or beginning to decrease in a few select cities, HIV remains unabated among gay and bisexual men in many parts of the world.

Our latest publication, “Getting on the Fast Track: Advocacy Priorities for the Global HIV & Human Rights Responses with Gay & Bisexual Men” carefully details next steps for coordinated action on reaching global targets in the HIV epidemic. The paper prioritizes four key issues:

Challenges in meeting these global targets are exacerbated by insufficient engagement of men who have sex with men in policy planning processes at the country, regional, and global levels.  Unless the unceasing epidemic among this key population is addressed with targeted, evidence-based, and human rights-affirming interventions, we risk undermining gains that have already been made in reaching global HIV targets. 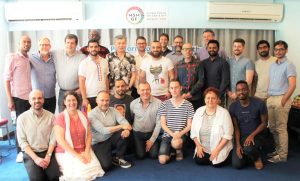 MSMGF, together with the Joint United Nations Programme on HIV/AIDS (with representatives from UNAIDS Secretariat, UNDP, UNFPA, the World Bank, and WHO), established The Global Advocacy Platform to Fast-track the HIV and Human Rights Responses With Gay and Bisexual Men. The Platform is a network of global and regional experts who provide guidance to UN agencies, global donors such as the Global Fund & PEPFAR, and other stakeholders. The Platform was formed in recognition that the HIV responses for MSM must be accelerated and scaled-up to reach global targets for ending the epidemic. In addition to efforts towards achieving the UNAIDS 2020 and 2030 targets, The Platform works in partnership with in collaboration with grassroots advocates and the Consortium of MSM and Transgender Networks to take an active role in elevating the sexual health and human rights concerns of gay, bisexual and other men who have sex with men in the context of the global HIV response.

During a meeting in Bangkok earlier this March, The Platform met to build upon priority issues identified by the Consortium of MSM and Transgender Networks. This new publication illuminates the position of the Platform on four advocacy priorities identified during this convening in Bangkok, and offers examples of messaging, potential partners, and data necessary to coordinate action.

Click here to download “Getting on the Fast Track: Advocacy Priorities for the Global HIV & Human Rights Responses with Gay & Bisexual Men”

MPact @mpactglobal
Saturday, October 16th, 2021 at 3:01pm
Queer migrants are particularly vulnerable. Human rights are fundamental and don't depend on which side of the border you are born. @WashBlade @mklavers81 #QueerMigrants
https://t.co/3HSbrH048d
View on Twitter
3
0

MPact @mpactglobal
Wednesday, October 13th, 2021 at 3:02pm
Countries that criminalize gay sex must be held accountable. We can't act like it's business as usual when they are killing us. @TomDaley1994 #DecriminalizeLGBT
https://t.co/S3skidixeV
View on Twitter
0
0

MPact @mpactglobal
Monday, October 11th, 2021 at 1:02pm
Coming Out can be difficult and joyous but always has an impact. #BeYou @them
https://t.co/eMeQd9fkpW
View on Twitter
0
0

MPact @mpactglobal
Friday, October 8th, 2021 at 3:02pm
Freedom of expression and freedom to assembly are basic rights that are fundamental in the fight for LGBTQ equality.
@ILGAEurope
https://t.co/Qp7eEIH5j4
View on Twitter
0
1

MPact @mpactglobal
Thursday, October 7th, 2021 at 1:03pm
It's profound for young Black queer folk to see themselves reflected in a superstar like @LilNasX Queer representation and visibility matter #Montero
https://t.co/ZLqoN32t19
View on Twitter
0
3

MPact @mpactglobal
Saturday, October 2nd, 2021 at 3:01pm
"For many of us, the 40-year pandemic has affected all facets of our sex lives, but we can continue to prioritize the pursuit of pleasure and intimacy." Sex in a pandemic or two.
#HIV #GaySex @AlexGarnerLA @TheAdvocateMag
https://t.co/S9L7szabNU
View on Twitter
3
5

MPact @mpactglobal
Thursday, September 30th, 2021 at 1:03pm
Do you know The Joys of Gay Sex? Learn more about the groundbreaking book, see the provocative pictures, and remember the power of gay sex @TheAdvocateMag #GaySex
https://t.co/NkV6QTIr7l
View on Twitter
6
28

MPact @mpactglobal
Wednesday, September 29th, 2021 at 3:02pm
It's not enough to simply make health care available we must ensure gay men can access the prevention and treatment services we need. Our lives depend on it. #HIV #GayMexico
@mklavers81 @WashBlade @baruchdom
https://t.co/n1TyWhYHH5
View on Twitter
9
14

MPact @mpactglobal
Sunday, September 26th, 2021 at 1:01pm
The fight for equality marches on. Congrats LGBT people of Ukraine for showing the power of protest and visibility. #QueerUkraine
https://t.co/YEsEUJLWF4
View on Twitter
2
5

MPact @mpactglobal
Saturday, September 25th, 2021 at 1:01pm
These laws criminal sexual behavior not love. Our ambassador to the UN needs to understand the very important difference. Gay people in nearly 70 countries are be persecuted for sex acts not love. It must end. #DecriminalizeLGBT @WashBlade @mklavers81
https://t.co/Yq66dw6Umb
View on Twitter
0
1

MPact @mpactglobal
Thursday, September 23rd, 2021 at 1:03pm
The right to abortion and the right to gay sex are the same issue - control over one's own body. We must fiercely defend both rights and work in coalition. @ProfMMurray @Queerty #ProChoice #DecriminalizeLGBT
https://t.co/eyaMHmivFb
View on Twitter
1
4