MSMGF has partnered with LINKAGES and FHI360 to publish, Rights in Action: Access to HIV Services among Men Who Have Sex with Men, the first of a series of technical briefs highlighting the main findings from MSMGF’s 2014 Global Men’s Health and Rights (GMHR) Survey.  Each brief will focus on specific challenges and opportunities that impact efforts to scale up coverage and quality of services for men who have sex with men (MSM) across diverse regional contexts.

The GMHR was launched by MSMGF in 2010 as a biennial effort to assess the current state of health and human rights among MSM on a global scale. The multilingual online survey focuses specifically on access to HIV prevention, testing, treatment, and care services, including the impact of barriers and facilitators that affect access to each category of service. The survey is designed to place access to services in the broader context of sexual health and the lived experiences of MSM.

For the first time since the GMHR’s inauguration, the 2014 survey includes a longitudinal component that allows for changes to be tracked over time. The 2014 survey also includes questions specifically designed for transgender men who have sex with men, providing a rare global perspective into the health and human rights of this demographic.

The first brief is dedicated to understanding perceived access to HIV services among MSM and the role of consumer confidence in shaping demand for services. The data presented shows that access to HIV prevention and treatment services continues to be unacceptably low among men who have sex with men (MSM), particularly among younger men.

Within the 2014 GMHR sample, less than 50% of MSM perceived that condoms, lubricant, HIV testing, and HIV treatment were easily accessible. Barriers to accessing services included discrimination from health care providers and homophobia. Survey findings also point to the importance of gay community engagement. Meaningful engagement with gay communities was positively associated with access to all service types, including HIV treatment. 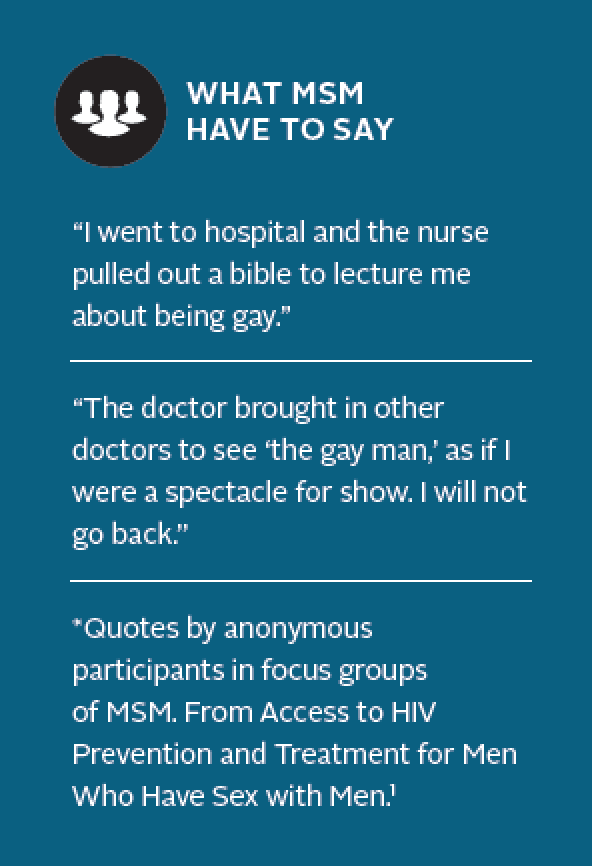 These findings signal an ongoing need to address stigma and discrimination in our response to HIV. They also suggest the powerful role that gay community can play in facilitating access to HIV services.

The brief provides ten actions that can be taken to proactively address barriers and bolster facilitators identified in this study. Recommended actions include specialty training for healthcare personnel, hiring MSM (including young MSM) to deliver services within local HIV programs, and assisting MSM to obtain reliable Internet access.

The full brief is available at here. Forthcoming briefs will be available starting in early 2016, and each will be posted to the MSMGF Blog.

A shortened link to this blog post for easy sharing is bit.ly/GMHR2014