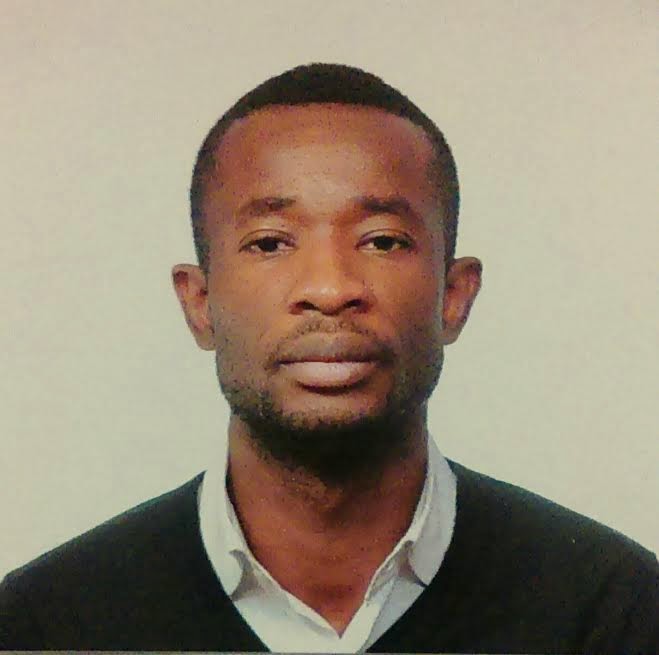 With the announcement of the 2015 David Kato Vision and Voice Award winner coming up on February 13th at the renowned Teddy Awards in Berlin, we are honored to introduce you to the 5 incredible people who have been shortlisted for this year’s award.
Today, we are thrilled to present Dominque Menoga from Cameroon.  Dominique has fearlessly campaigned for HIV advocacy among sexual minorities, putting his life on the line and founding multiple human rights organizations in his home of Cameroon. Dominique‘s activism has made him into a target for violence and harassment many times – after receiving numerous death threats he was forced to flee to France where he continues his activism to this day.
Born in Yaoundé, Cameroon in 1982, Dominique recognized the need for effective LGBTI advocacy after coming out to his parents as a teenager. His experience of severe alienation as well as physical and emotional abuse from his parents forced him to reflect on the ignorance surrounding LGBTI people.  Dominique quickly realized the need for advocacy initiatives in Cameroon, and began mobilizing himself and his friends around efforts to increase awareness and fight homophobia.
In 2006, after a spate of homophobic attacks in Cameroon, Dominique and his friends galvanized to form Alternatives-Cameroon. Comprised of a team of doctors, lawyers, and other healthcare providers who are also activists, Alternatives-Cameroon aims to reduce the impact and spread of HIV among MSM, as well as fight widespread homophobia in Cameroon.

During his time with Alternatives-Cameroon, Dominque provided meaningful leadership as a peer educator, working with men who have sex with men (MSM) and other LGBTI people to raise awareness on STI/HIV/AIDS testing, treatment, and prevention. He also provided much-needed counseling for young sexual minorities who often face rejection and discrimination from their families and peers – something Dominique deeply identifies with. In this way Dominique shaped and established one of the most accessible safe spaces for the LGBTI people of Cameroon, allowing them to come together and find community in a country where sexual minorities face intense homophobia and hostility.

Between 2008 and 2009, Dominique and friends created ADEPEV Association (Action for Development and Fulfillment Vulnerable Persons). Dominique served as deputy head of ADEPEV, where he organized and supervised his team.

In addition to its work against AIDS, ADEPEV established a legal section, which deals primarily with conflicts within the gay community, and has launched lobbying efforts at the national level. ADEPEV is now 100 members strong and still growing.

In November 2010, Dominique was selected to participate in two different LGBTI human rights trainings. Informed and emboldened once these trainings came to a close, he resigned from his position with ADEPEV and joined forces with his best friend, the late activist Eric Lembembe, to form The Cameroonian Foundation for AIDS (CAMFAIDS). Dominique acted as founding president of CAMFAIDS, an organization working to increase HIV awareness.
One of the achievements Dominique is most proud of is the Open Letter to the President of Cameroon on discrimination based on sexual orientation and gender identity and the criminalization of sexual relations between persons of the same sex in Cameroon, which he wrote with Eric Lembembe.  The letter documented cases of violations of the rights of LGBTI people. These violations were contrary to United Nations treaties that Cameroon had signed and ratified.
Another great accomplishment was his report sent to the United Nations for the UN Universal Periodic Review for Cameroon in 2013.  This report was developed in partnership with organizations working on human rights in Cameroon and with the support of ILGA.

Dominique was forced to apply for asylum in 2013 after receiving death threats due to his high-profile activism in Cameroon. He was granted asylum in France, where he continues his HIV advocacy work with vulnerable populations. Despite putting his life at great risk, Dominique is an inspiring example of a change-maker providing profound leadership in the face of challenging, life-threatening circumstances.

The DKVVA is supported by a Secretariat based at the Global Forum on MSM & HIV (MSMGF). The MSMGF advocates for equitable access to effective HIV prevention, care, treatment, and support services tailored to the needs of gay men and other MSM, including gay men and MSM living with HIV, while promoting their health and human rights worldwide. You can find more information about the MSMGF at www.mpactglobal.org.

MPact @mpactglobal
Thursday, September 17th, 2020 at 11:15am
With #COVID19, it's important to stay informed, to reach out for support, and prioritize self- and community-care.

Be sure you're getting accurate information from reliable sources, how it spreads and where you can get health services https://t.co/8yybI31Vea
View on Twitter
1
2

MPact @mpactglobal
Wednesday, September 16th, 2020 at 11:15am
Men living with #HIV in countries where sex between men is criminalized were twice as likely to say they had poor access to health care

More data from the #GMHR here: https://t.co/IgOC0LBlIV
View on Twitter
4
8

Which sessions are you most excited for? We're looking forward to this important conversation on the future of key population funding with our partners at Bridging the Gaps https://t.co/upyuBhLnpj
View on Twitter
1
4

MPact @mpactglobal
Sunday, September 13th, 2020 at 10:25am
With stories from Malawi, South Africa, Egypt, Russia, India, Mexico, and the Palestinian territories, this new piece of journalism is a landmark study of unprecedented frontiers in the battle for #LGBT and civil rights https://t.co/rzTcLIZ5Zo
View on Twitter
0
0

MPact @mpactglobal
Saturday, September 12th, 2020 at 9:25am
Nobel and Oscar-winning artists in #Poland were among the 70+ signatories in an open letter addressed to the European Commission President voicing outrage at “repressions directed against the #LGBT+ community” https://t.co/W9tdV0ndvW
View on Twitter
0
2

MPact @mpactglobal
Friday, September 11th, 2020 at 7:20pm
PrEP has completely changed the way we think about HIV & AIDS, but not everyone has access to this life-saving intervention.

We've compiled case studies from 7 countries rolling out and scaling up programs on #PrEP - Check out our latest publication here! https://t.co/egWXm5f0uj
View on Twitter
2
2

MPact @mpactglobal
Thursday, September 10th, 2020 at 1:35am
Thank you @ayadog1 for your years of commitment to the sexual health and human rights of gay men around the world!

The Board and Staff of MPact are looking forward to our next chapter! https://t.co/tYnUbh6eL1
View on Twitter
3
5

MPact @mpactglobal
Tuesday, September 8th, 2020 at 4:38pm
#AB2218 is on the California Governor @GavinNewsom's Desk! This bill would change the landscape for TGI people across California. We cannot let it get it veto’d!

MPact @mpactglobal
Monday, September 7th, 2020 at 12:02pm
Did you know that all of @HIV2020's sessions are available as podcasts on Soundcloud? This includes dubbed translations in English, Spanish, French, Portuguese & Russian! https://t.co/8tRldq2rpl
View on Twitter
4
6

MPact @mpactglobal
Saturday, September 5th, 2020 at 11:01am
LGBT activists in #Indonesia are working to respond to the #COVID19 pandemic in their community https://t.co/UR1KiSdpwu
View on Twitter
0
1

MPact @mpactglobal
Friday, September 4th, 2020 at 10:02am
Men living with #HIV in countries where sex between men is criminalized were twice as likely to say they had poor access to health care

More data from the #GMHR here: https://t.co/IgOC0LBlIV
View on Twitter
2
4

MPact @mpactglobal
Thursday, September 3rd, 2020 at 10:01am
Watch highlights from all of our August sessions and stay tuned for more important discussions on key population health and rights through the month of October!

All of our virtual sessions are recorded and dubbed in five languages! #ReclaimTheResponse
https://t.co/Yj8BqKnGRa
View on Twitter
0
1

Check out our guidelines for safer sex in the time of COVID here: https://t.co/sSLwz4WzlW
View on Twitter
4
4
Menu