Angel Fabian is the Advocacy Coordinator for MPact’s Fijate Bien program, which is a new advocacy initiative focused on the HIV prevention needs of Latinx gay and bisexual men in the United States. Below, Angel describes his story of how he got involved in this critical work and tells us more about what we can expect to see from Fijate Bien.

In the mid 90s, I had the honor of meeting a young immigrant activist, Miguelito, who had been diagnosed with multiple STIs including an AIDS diagnosis at the age of 17.

When he was first diagnosed, he went into a deep depression and declined medical and support services.  He had been thrown out of his home in Mexico as a child after being found messing around with another boy by one of his brothers. He then fled to Mexico City and faced homelessness and engaged in survival sex, somehow eventually migrating to the US.

When I reconnected with him by chance out in the community around the same time, we had a long talk, some laughs and a good cry.  From that point on he was ready to continue living, started accessing services and began educating his own family and raising community awareness about HIV and challenges face by LGBT people.  His life was cut short from devastating bout with Toxoplasmosis at age 21.

His legacy of perseverance, lightness, passion and tenacity still reminds me to continue taking care of myself and to honor the life stories fueling the advocacy work I do. 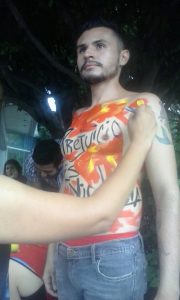 In 2015, among all U.S. Latinx living with HIV, only 59% received HIV medical care, 49% were retained in HIV care, and 50% had a suppressed viral load.[3] Access to HIV care and treatment services is seriously compromised for Latinx gay and bisexual men by stigma, homophobia, and discrimination.

If current trends continue, 1 in 5 Latinx gay and bisexual men will be diagnosed with HIV during their lifetimes.[4]

MPact’s Fijate Bien project has begun working with national, regional and local partners to advocate for solutions to address these disparities. Starting on the US national level, we are working with public health officials, funders, long-term and recent AIDS activists and community members to break down the structural barriers faced by Latinx gay and bisexual men which include:

Beyond all these structural barriers, we need to work to connect this issue to other struggles that impact Latinx gay and bisexual men such as mental health, substance use, homelessness, lack of transportation, unemployment and engagement in survival sex. 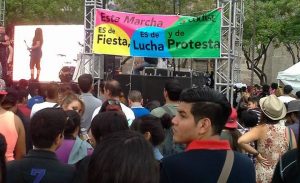 I am an immigrant, curander@, two-spirit/queer, Zapotec@/Xican@ activist and organizer. My life experiences have enabled me to connect, advocate with/for, uplift and celebrate community members from all walks of life. I have taken a nontraditional path academically and professionally that has allowed me to stay connected, if only through social media, to the continued struggles and the amazing activism impacting marginalized communities in the US and internationally.   My continued commitment is to aid in the dismantling of systems of oppression, that in many ways contribute to disparities in access to health services.

The Fijate Bien program is working to support advocacy efforts that are designed to address the barriers to HIV prevention and treatment services for Latinx gay men in the United States.  Our plan begins by establishing partnerships between advocates in the US and advocates globally to foster multi-lateral exchange, innovation, coordination and scale-up interventions aimed at improving HIV service access.  Through this, we aim to strengthen organizational and strategic capacity necessary for ensuring unobstructed HIV testing, prevention, treatment, care and support for Latinx gay and bisexual men in the United States.

Through this position, I continue to learn, grow, contribute and advocate with/for Latinx gay, bisexual, and queer men around issues of HIV/AIDS and health disparities from an intersectional framework at a regional, national and international level.  I look forward to reconnecting with colleagues and forging new relationships along the way.

[1] HIV prevention pill not reaching most Americans who could benefit – especially people of color. https://www.hiv.gov/blog/hiv-prevention-pill-not-reaching-most-americans-who-could-benefit-especially-people-color March 6, 2018.

[4] Hess KL, Hu X, Lansky A, et al. Lifetime risk of a diagnosis of HIV infection in the United States

MPact @mpactglobal
Sunday, April 11th, 2021 at 12:25pm
A huge set back for LGBTI people in #Arkansas and a sign that our fight for our basic human rights here in the US is far from over https://t.co/sc7G2iMVLp
View on Twitter
0
2

MPact @mpactglobal
Saturday, April 10th, 2021 at 12:25pm
Exciting new out of #Angola but there is still much work to be done to ensure that #LGBTI people are protected and empowered in the region https://t.co/Otrl23h0Ps
View on Twitter
0
2

MPact @mpactglobal
Friday, April 9th, 2021 at 12:25pm
"We must ensure that we are putting inadequately served populations at the center of our response” - MPact Community Mobilization Manager, Johnny Tohme https://t.co/wCIqlYRiRJ

MPact @mpactglobal
Wednesday, April 7th, 2021 at 6:38pm
“As gay men we manage risk all the time. Will this trick beat me up? Will I get HIV? Will I get syphilis? We already have the skills to survive a pandemic. We did, and we’re doing it. We’re flexible; we adapt.” - @Aspield https://t.co/P72eCw1gRo
View on Twitter
5
10

MPact @mpactglobal
Wednesday, April 7th, 2021 at 10:25am
Last year at MPact we reached:
- 15,575 people with funding for sexual health services
- 794 service providers with trainings on LGBTI issues
- 7776 advocates with resources for key populations
& so much more!

MPact @mpactglobal
Tuesday, April 6th, 2021 at 3:55pm
Check out our list of recommendations for @PEPFAR about what communities want to see from the Key Population Investment Fund #KPIF https://t.co/KOsqk5nszo
View on Twitter
1
0
Menu