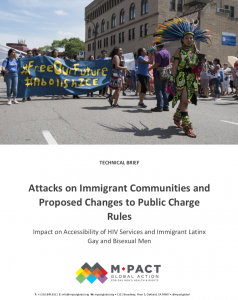 On October 15, 2019, the U.S. government proposed to change how it makes public charge decisions which specify the grounds for a person to be denied admission to the US (i.e. to obtain a visa) or adjustment of legal status (i.e. to obtain a green card). Immigration officials will now look more closely at factors like health, age, income, skills (including English language skills), and use of more public programs such as EBT and Medicaid.

Denying housing opportunities based on perceived or actual immigration status is not only discriminatory but can be detrimental to the health of people living with HIV. Studies have concluded that lack of stable, secure, adequate housing is a significant barrier to consistent and appropriate HIV medical care, access and adherence to antiretroviral medications, sustained viral suppression, and risk of forward transmission.

As a result of the advocacy efforts of immigrant rights organizations, community health centers, policy makers and community members, multiple federal courts have blocked the changes from going into effect. This is a significant development and given this current administration persistent attacks on immigrant communities. It will be critical to follow these developments closely as they progress.

That is why MPact’s Fijate Bien program has released its most recent technical brief “Attacks on Immigrant Communities and Proposed Changes to Public Charge Rules: Impact on Accessibility of HIV Services and Immigrant Latinx Gay and Bisexual Men” which outlines how public policy has shifted for immigrant communities in the United States and provides a list of recommendations for policy makers, advocates, health workers as well as communities. Within this brief, MPact and its partners called on policy makers, funding partners, and allies to denounce anti-immigrant initiatives and laws, including changes to Public Charge rules. The recommendations are summarized as followed:

As researchers, policy makers, advocates, direct service providers, community stakeholders, allies and those of us who are immigrants and/or descendants of immigrants, it is our duty to publicly stand against xenophobia and racism. Trump administration policies hinder the effectiveness of any efforts at ending the epidemic.

We urge HRSA, SAMSHA, CDC, and NIH to provide adequate funding and resources to Latinx gay and bisexual organizations that have traditionally partnered with immigrant rights organizations to proactively address this public health crisis.

We urge state health departments to assess the impact of immigrant attacks and changes to public charge rules on the effective implementation of Getting to Zero campaigns and Ending the Epidemic(s) campaigns.  This includes providing guidance to local health departments on how to respond to this public health crisis.

We urge local health departments and HIV prevention, care and treatment providers (including community health centers and CBOs) to take a public stance on their relationship with ICE and making know your rights information available to providers, clients and community members.

We urge community activists and allies to continue their critical advocacy work with and on behalf of those that may not be able to speak out, for fear of detention and deportation.  If possible, in coalition with community partners and networks, develop rapid response protocols to respond to direct xenophobic attacks and ICE raids.