Ricky Nathanson “Rikki” is the Executive Director of Trans Research, Education & Training (TREAT) Zimbabwe, the first trans led, and gender diverse focused organization in Zimbabwe.  As a TEACH Technical Advisor, Rikki is working with MSMGF and IRGT to deliver high-quality trainings to trans-led organizations in her region.

Learn more about and apply for the upcoming TEACH Regional Learning Labs in Asia, Latin America, and the Caribbean 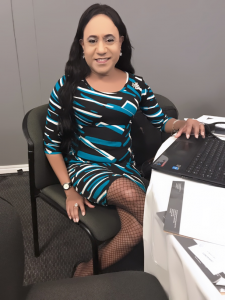 MSMGF: Tell us about yourself.

Rikki: I am a mature transwoman coming from a very diverse background.  My professional training, experience and qualification is in the accounting, corporate governance and legal sectors, having qualified with the Institute of Chartered Secretaries & Administrators of Zimbabwe.

At the age of 28, I was the youngest Company Secretary of a blue chip company on the Zimbabwe Stock Exchange.  Additionally, I was involved in the arts, initially as a hobby growing up – piano, dance and choir.  Later on in life I discovered the thrill of the modelling industry, eventually opening my own modelling agency after transitioning in 2005.  Within the first seven years of its existence, my modelling agency produced six of the winners of the Miss Zimbabwe title.

I became an active human rights defender in 2007, when I joined the Sexual Rights Centre [SRC] as a Board Member.  As a member of the LGBTI community of Zimbabwe, I was all too aware of the struggles we face as a minority group in a country, who’s then President likened us to “pigs and dogs”, and the abuses we faced as a marginalised population.  The SRC also is a strong advocate in the fight for the rights of sex workers – their right to a non-discriminatory existence, with their right to bodily autonomy and their right to choice of work.

Seeing the huge gap in the response to equal rights for trans and gender diverse people in my country, I established Trans* Research, Education, Advocacy & Training [TREAT] in 2015 – the first trans led, and gender diverse focussed organisation in Zimbabwe.  Up to that point, other mainstream LGBTI organisations purporting to be working “on trans issues”, would receive funding and support – but this work was mainly lip service, with the token trans woman assigned to a “trans desk”.  It was that same year that I was instrumental in the formation of the Southern Africa Trans Forum [SATF], and was appointed its Secretary in 2016.

MSMGF: What attracted you to become a TEACH Technical Advisor?

Rikki: My reasons for deciding to become a TEACH Technical Advisor were several.  I realised that my professional training and experience are tools that need to be shared among other deserving trans focused organisations. I also realise that these organisations are under-funded and lack capacity across the board.  The reasons for this go back to my observation above where other mainstream LGBTI organisations would relegate the trans population, and their cause to the back burner.  This was mirrored by the funders’ decision on which organisations to they decided to support, thereby enabling them to grow.

Many trans individuals have never had the chance to be educated in order to enhance this seemingly sadly lacking capacity; how to draw up a budget, a work plan, project management and monitoring and evaluation.  This lack of knowledge is however, not the fault of the trans individuals, many of whom were denied education and the basic chance in life by virtue of the fact of their gender expression and identity, which saw them being bullied at school, subsequently dropping out and being ostracised from communities and homes, in a never ending downward spiral.

This is my chance to “do my bit” for our people – assist in cultivating, enriching and empowering them from the roots up, to build strong organisations, and ultimately a strong movement. .

MSMGF: In your experience, what is the biggest challenge facing trans-led organizations in your country or region?

Rikki: Coupled to my observations above, in the region of Southern Africa,  issues around gender diverse persons are subsumed and conflated with those of the greater gays and lesbians.  Except for South Africa, the term transgender is not even in use or acknowledged, thereby depriving the trans and gender diverse population of their basic human rights.

Across Southern Africa, same-sex sexual practices are criminalised.  This has resulted in the trans and gender diverse community also falling victim to harassment, abuse and violence by the police and other state agents.  This is perpetrated by vicious anti same-sex propaganda being spewed out by religious leaders, politicians and other community leaders.

This past month saw anti LGBTI publications in the media in Zambia, resulting in a crackdown on the LGBTI community, with arbitrary arrests and victimisation.  Tanzania recently, saw the same, if not worse fate.

Many trans people have not had adequate platforms to address these issues and fight for their own rights, as other leading LGBT organisations that purport to be working on trans issues, in actual fact, are not doing anything meaningful to fight for the cause of the trans diverse population.

MSMGF: What are you hoping to achieve at the upcoming TEACH Regional Lab – Latin America and the Caribbean?

Rikki: Without sounding corny, I certainly hope that this lab will see participants leaving with much more information, skills and capacity than what they initially walked in with.

I also foresee this TEACH Regional Lab, as not only being and information hub – a place for participants to only soak up information.  I hope that the teaching/learning process will be an osmotic experience where the cross pollination of information, experiences and contacts benefits all in the room – myself included.

Learn more about and apply for the upcoming TEACH Regional Learning Labs in Asia, Latin America, and the Caribbean

Deadline for applications has been extended to 15 January 2018

MPact @mpactglobal
Thursday, January 9th, 2020 at 11:30am
Join us at the US National Hispanic/Latinx Health Leadership Summit this March! Register now! @LatinoCommAIDS https://t.co/3XYILdlCp2
View on Twitter
3
2