A Message from the Executive Director 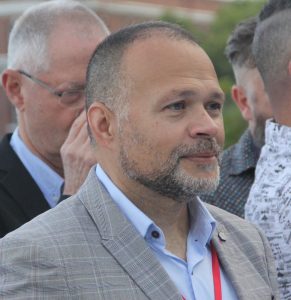 If I had to characterize 2017 with a single word, it would be pivot.

Indeed, over the past few years, MSMGF has gradually and very deliberately initiated a strategic evolution of its work. We are pivoting outward from our work grounded in the nexus of HIV, health, and rights of men who have sex with men. Our pivot is based in the recognition that in order to successfully address HIV within communities of gay men and other men who have sex with men, there must be a collective move to understand HIV in the broader context of our sexual health. 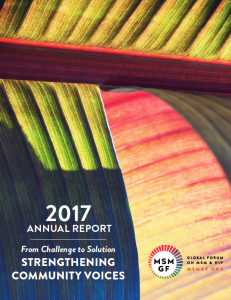 Such a reframing of HIV requires an unwavering focus on the quality and coverage of community services and healthcare, as well as the human rights and funding environments in which these operate. MSMGF has therefore created curricula, training, program models, research initiatives, and advocacy agendas aimed at competently articulating and addressing the comprehensive and holistic HIV and sexual health needs of gay men and other men who have sex with men.

Our organizational pivot is leading us into national and international development spaces that can create the funding, policy, and legal conditions necessary for gay men and other men who have sex with men to live healthy and fulfilling sex lives. As part of our pivot, we are also expanding our coalition work to include the broader LGBT communities. Therefore, each of MSMGF’s achievements this year has been underscored by the nurturing and building of networks and coalitions, which specifically help fortify our advocacy actions and more generally our movement-building objectives.

Deepening partnerships with networks of people living with HIV, youth, transgender people, sex workers, people who inject drugs, and rights activists in 2017 highlights the intersectional nature of MSMGF’s work. These partnerships also compel us to keep striving for multi-faceted, inter-connected, and complementary approaches to our work, as evidenced in the multi-lingual offerings of curricula, the increased use of video for advocacy and educational purposes, and the expansion of our social media presence.

At its core, MSMGF is and will remain an advocacy organization. Even as we expand our technical assistance, community research, and communications, all our work is in the service of our advocacy mission. Everything we do is to ensure equitable access to HIV services for gay men and other men who have sex with men, while promoting their health and rights worldwide.

Lately, I find myself frequently returning to MSMGF’s Strategic Plan – Community Action, Sexual Health, and Human Rights – and the published report upon which it is based – A Fundamental Shift: The Future of the MSM and HIV Movement. Both documents resonate strongly with me in their predictions of the future, while reminding me about the importance of focused and tactical action, especially now. Both documents lay the ground work for our three strategic directions, which have come to characterize MSMGF’s pivot:

Our 2017 Annual Report is as much an expression of appreciation as it is a recap of recent achievements. As we have expanded our cadre of staff, consultants, and networks of advocates, we have also expanded our base of funders, without whose support MSMGF’s achievements are not possible.

Thank you for another great year!